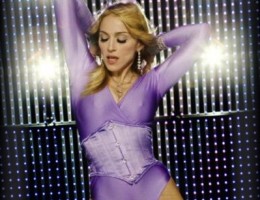 Before, Madonna was young and she dated Sean Penn.

Also, she made hit record albums. Sorta like Lady GaGa, Britney Spears, and so on.

That was then, or before. These days, Madonna (old) persists in bugging us with her CDs and so on. When’s it gonna stop?

“Not soon,” says Gladys Bage, 20, a stay-at-home stereomom. “I joined an online discussion group right in my own kitchen, and according to whut cutting edge bloggers on CNN and so on are texting, Madonna could be like preserved and continiue endlessly.”

“No, really, if you ever get the chance to step out of your lowly social class you’ll see there’s this whole other  rung, or world or whuthaveyou, where head honchoes (such as Madonna) get to do anything,” she went on.

But, do I have to be a prick to join?

“That’s a raging debate about that online right now.”

Man, I’m still tryin’ to get over my boob tube addiction. Is the whole Internet thingy even worth the bother?

“Well, her face is gonna, well, is melting, if you will,” whispered Gabe Nighyt, 18, who got good jobby at MIT (Meteorite Internet Time). “But, that does hold the interest of the scientific community, in and of itself,” he went on.

Is she gonna start playing like jazz, or world music?

“It’s hard to tell, but there are warning signs; has she been on any recent trips to Africa?”

I’m not sure. Let’s check the Internet.

Better than nothing, DJ Salinger shakes it where the sun don't shine. BT' s resident recluse on the loose, Salinger is the trouble with this generation, begging the question, What is the sound of one fist bumping?
View all posts by DJ Salinger →
This entry was posted in Thinking Man's Rock and tagged africa, britney spears, cnn, dj salinger, lady gaga, madonna, madonna.aging, sean penn, stereomoms, takoyaki, the brutal times, the Internet, world music. Bookmark the permalink.

2 Responses to Madonna is Old