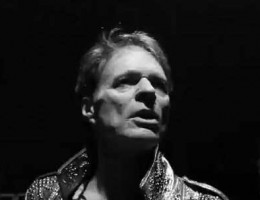 Surprisingly, Paul is not alone.

A MyGoodies/InfoSandwich poll carried out in elevators and Mr. Donuts coffee restaurants found that 99.9% of classic rock fans and their spouses support the conspiracy theory that Roth could have been replaced by Martin, in what has to be the most embarrassing attempt at a classic rock comeback since Guns N’ Roses’ 2008 crap attack, Chinese Democracy.

The supporting evidence is provocative, to say the least.

“I mean, first, you’ve got his face – that’s Steve Martin’s face he (Roth) has on right there (in the Tattoo video), ejaculated Professor Rant Foaming, 58. “And then, in the video – all that mugging for the camera – all that goofy dancing – tell me that isn’t Steve Martin,” he went on.

No one under forty knows who Steve Martin is.

No one under fifty knows who David Lee Roth is.

Few people ever really get to know themselves.

Most of you saw that coming.

Is Van Halen any good with Steve Martin singing?

“Uh, no, they are not any good with Steve Martin singing,” chimed Jazz Man, 60. “Well, I mean, for you they might be good – you who have lowered your expectations so much that you believe in nothing.”

“Tell me you’re prepared to give Van Halen with Steve Martin a fair chance.”

“You’re- oh, I should have seen this coming. You don’t even believe the conspiracy, because you think it’s too simple. You’d rather believe in a conspiracy of a conspiracy”

I just remember Steve Martin being funnier than that.

“Didn’t you hear the jokes Roth – Martin – was telling at the show they did in New York?”

“You think that was more…more like a Kramer kind of – more like some stand up Kramer would have done.”

Thankfully, no. But, come to think of it, did you ever notice Kramer looks a lot like Sammy Hagar?

Better than nothing, DJ Salinger shakes it where the sun don't shine. BT' s resident recluse on the loose, Salinger is the trouble with this generation, begging the question, What is the sound of one fist bumping?
View all posts by DJ Salinger →
This entry was posted in Exclusive! and tagged 2012 U.S. presidential election, a different kind of truth, chinese democracy, david lee roth looks like steve martin, dj salinger, guns n roses, kramer, new van halen video tattoo is embarrassing, ron paul, sammy hagar, the brutal times. Bookmark the permalink.