Finally, things are looking up 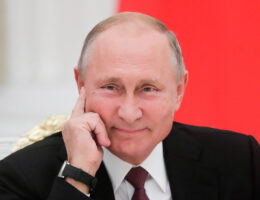 By Styles Cradgerock, THE HAGUE – Russian President Vladimir Putin has ended his “special military operation” in Ukraine. North Korean leader Kim Jong Un says he will stop launching missiles and end his nuclear weapons program. Former U.S. President Donald Trump says he’s not thinking of himself so much these days and if he runs for president in 2024 he’ll use You First as his campaign catchphrase.

The COVID-19 pandemic has also ended.

Putin, reached in his den in Moscow, told The Brutal Times he had apologized to Ukraine President Volodmyr Zelensky. Although Putin did not use the words war or invasion when discussing the invasion and war he said, “Maybe I overreacted. Everybody does it. I think it’s important for leaders to be accountable and acknowledge when they make mistakes (that result in the deaths of thousands of innocent people and raise U.S. gas prices).”

He said he’d be sending troops to help rebuild Ukraine and would make it “even better than before.” The long-serving leader also said he’s planning to retire in the next month or so and turn his attention to things other than politics. “Life’s too short. I may take up oil painting,” he went on.

North Korea’s Kim Jong Un said he, too, is looking to turn over a more happier leaf. Kim told Brutal Times teen correspondent Billy he was open to sharing his country’s missile technology and hoped it could be used for things “more fun” than destroying the world or great big parts of it.

Asked if the tech could be used for roller coasters or other amusement park rides, Kim said, “Yeah, maybe,” and smiled. Then he even smiled again.

U.N. Secretary Big Willie has already asked Kim’s sexy sister if any leftover missiles might be used for fireworks at U.N. shindigs. Discussions are underway between scientists in North Korea and other countries to see if it’s not too ridiculous.

Former U.S. President Donald Trump hasn’t quite become a Never Trumper, but he too is turning over a new bumper. “I get it. I listened,” he said, in a brief press conference at Denny’s in Palm Beach on Wednesday from 8:02 a.m. to 8:10 a.m. “Just tell me if I go on too long or say anything that sounds self-indulgent, or crazy,” he went on.

Meanwhile, Top doc Tony Fauci says air-lovers around the globe can take off their facemarks forever as the seemingly endless coronavirus pandemic has now ended.

The Fauchster  said he’ll start looking for a new job on Monday and isn’t too picky about what he’ll do, although he’d love “to have a crack at heading the Fed.”

Prices were already falling to 2019 levels when Powell came out of the shower this morning before slipping into some furry slippers and a vintage Top Gun T-shirt with no references to China on Tom Cruise’s jacket. “I bought a Diet Coke right on the street and it cost me 25 cents,” he said. Data shows that the day before that same Diet Coke cost 55 dollars.

Murders also plunged across the planet and couples that broke up years ago got back together for make-up sex.

Closely following the rules of Pythagorus - to abstain from beans, not to pick up what was fallen, not to eat the heart, and refusing to look in a mirror after midnite, Cradgerock gets all up in the grills of all the world's leaders and their pets like you knew he would.
View all posts by Styles Cradgerock →
This entry was posted in Latest Brutality, Presidential Daily Brief and tagged Finally, good news 2022, inflation is over, north korea, some good news, styles cradgerock, the brutal times, vladimir putin, way too earnest, when will covid-19 end. Bookmark the permalink.