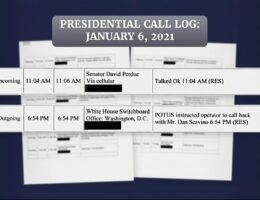 By Styles Cradgerock, PALM BEACH — The committee investigating the deadly insurrection at the U.S. capitol  has decided to accept an offer from former U.S. President Donald Trump to store its evidence against him at his Florida estate, Mar-a-Lago.

The committee has been struggling to find a secure home for the treasure trove of documents, Tik-Tok videos and NFTs that it has amassed over the 15 months since it began investigating the Jan. 6, 2021 attack.

A source within the investigation, who can’t be named because they have no name and aren’t in the investigation, said they enjoyed being a source. They added that committee members hit on the idea of storing their goodies at Mar-a-Lago because “I said, ‘Well, where did they come from?’ And of course, they said, ‘Well, most of it came from Mar-a-Lago.’ And so I said, ‘Well, duh, why not just ship it back there and let them store it?’ I mean, that way the onus is on them to keep it safe. Really, it was a no-brainer.”

Is that the way the government makes most of its decisions?

Is that the way the government makes most of its decisions? By not using its brains?

“No, most of them are eggheads. So usually they overthink things. That’s why it took them so long to figure this out — until I stepped in.”

Do you think the evidence will be safe at Mar-a-Lago?

Well, a cat burglar could..

“No, they have an alarm system.”

Phew. I guess, that makes it seem like the stuff was safe there all along, like before the FBI seized it and all.

“No, they sort of just picked it up. I mean ‘seizing’ implies that they sort of lunged forward or backward and rushed to grab stuff.”

So they didn’t do that?

“No, they sort of bent down or reached over — at a regular pace — and picked things up. These guys get paid by the hour so it’s not really in their interest to snatch things up or rifle through them. And then there were older agents who argued for, you know, being meticulous and slowwwwly going through stuff.”

But weren’t they trying to get things done before Trump got back for dinner?

“No, no, no. It’s– Look, it wasn’t The Three Little Pigs, you know? Or The Big Bad Wolf and all that. It’s like you’re trying to make it all into some nursery-rhyme search scenario.”

So… there was no porridge? That had gone cold?

Closely following the rules of Pythagorus - to abstain from beans, not to pick up what was fallen, not to eat the heart, and refusing to look in a mirror after midnite, Cradgerock gets all up in the grills of all the world's leaders and their pets like you knew he would.
View all posts by Styles Cradgerock →
This entry was posted in Genius of the Week, Latest Brutality, Presidential Daily Brief and tagged Donald Trump, Jan. 6 committee, mar-a-lago, styles cradgerock, the brutal times. Bookmark the permalink.