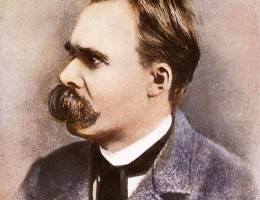 By Daemon Mailer, HELSINKI – Internet users and their online friends breathed a collective heavy sigh of Internet relief this morning at news that the Obama Administration and governments around the globe will allow German philosopher Nietzsche’s new sex tape to stream a little longer.

Nietzsche, who died a long time ago, has gone viral with his latest sex tape, Deep Thinker. If he wasn’t dead, he’d be poised for a comeback.

“Yeh-yeh-yeh-yeh-yeh, that’s right. That’s it exactly,” agreed a large British man, who was standing beside me, shoving me aggressively.

Nietzsche, was boring to some, but he gave a little hope to me, growing up, always shorter than everybody else. Staring at their legs (I’m referring to myself – meself? – not Nietzsche). Back then we didn’t have sex tapes, we just had sex slides. Those were a little boring.

Moving along, Nietzsche’s new sex tape has the great philosopher making it with a total of 7,709 people.

Most of them are OK-looking.

The tape is 5 years long.

If you fast forward it, you can wipe 2 years off your busy schedule.

Some spoilsports say the guy in the sweatpants isn’t Nietzsche.

It looks a lot like Nietzsche. In the sweatpants.

“No, I’m not agreeing. I think people are getting ripped off if they buy this sex tape.”

Well, what other sex tape should they buy, then?

They are at home. That’s why they need the sex tape.

“I’m not in favor of spicing up one’s home life with – with a sex tape.”

Have you heard David Hume is coming out with a line of massage oils?

Let me…just get my helmet on. There.

Stop it! Stop it!

* Dear BT readers, the remaining intended portion of this article by Daemon Mailer about Neitzsche’s new sex tape is currently unavailable at this time. Please check back and see if it is later when the fight has ended – The Brutal Times

Sweet little Daemon Mailer invented the internet in his garage while he was trying unsuccessfully to invent the first rental video store. Like the rest, Daeme is also making moves to cash in on BT's success and avoid eating peanut butter out of a jar livin' in his car the rest of his life. All during the night as he wiggles to an 'fro, some kinda machine records his thoughts, churning out a pile o crud to be compiled in the forthcoming tome, “I am Spam.”
View all posts by Daemon Mailer →
This entry was posted in Go Deeper and tagged bookmobile, daemon mailer, david hume's massage oils, deep thinker, New Nietzsche Sex Tape!, nietzsche, price waterhouse coopers, prof rant foaming, the brutal times. Bookmark the permalink.