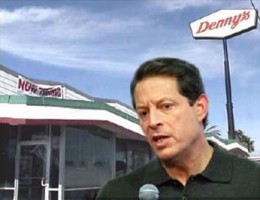 By Barry Hussein, HOUSTON – Nobel prize-winning man Al Gore met with concerned celebrities this morning at Denny’s to discuss the nation’s largest decline of headroom since the 1930’s.

Celebrities, Gore says need headroom more than most because their heads are proven to be more inflated than nobodies.

Denny’s swayed to the hot calypso beat of local dj Jimmy Jam-san, 50, who warmed up the star-studded breakfasters while Gore chatted with a woman wearing a frumpy hat in the foyer.

After Gore tired of the lady’s company he strode boldly to the lectern by the drink bar and kicked things off with an unexpected reading of a list of 17 million celebrities at risk of grazing their heads due to the current headroom crisis.

50 Cent was pleased at the reading because he “felt cleansed by the fact that I was not sucking up energy by staying at home because I was energy pooling with others at the Denny’s.”

Many others were bored but muted their anger, only occasionally shuffling their feet or crying out.

“Exactly,” concurred Greta Sustern. “Thank God Gore is speaking out, and resetting everybody’s preset on this,” she went on.

Headroom has shrunk in offices, elevators, cars and Hollywood studios by over 79% since October.

“Look, instead of trying to- ah, we’ve been down – I think what we’ve all tried to do is focus on the, the ah solution to the uh crisis and get more headroom to these people,” said President Obama, on his FaceBook homepage.

Other countries are encountering headroom shortages as well, but since their stories are not as interesting they won’t appear.

“I hope Britney has enough headroom,” said Jill Wintimeer, a 19 year-old philosophy student at Berkley, in reference to US singing sensation Britney Spears.

Gore spoke somberly on the topic of headroom for 11 hours without once taking a breath. During the speech an aide to the former vice-president emailed The Guinness Book of World Records to see if Gore could get a prize for the lengthy speech.

“I didn’t get a response from them yet,” said Larry Dill, the aide. “But their inbox is probably filled so I’m not going to take it personally or anything,” he went on.

A ferocious intellect, Barry Hussein is not for everybody. Twisting and frugging the nite away, Hussein entices us to sniff his mink sweatpants. Covered in cake, he muses, "Sometimes the hardest sweatpants to fill...are your own."
View all posts by Barry Husein →
This entry was posted in Thinking Man's Rock and tagged 50 Cent, al gore, avril lavigne, barry hussein, brad pitt, britney spears, calypso, celebrities, condoleeza rice, crisis, dennys, facebook, headroom, hollywood, houston, nobel prize, obama, the brutal times. Bookmark the permalink.

One Response to Gore Warns Celebrities Over Lack of Headroom