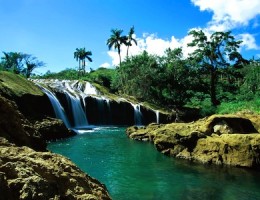 By Brad Bremner, (Special to the Brutal Times) Cuba, VERADERO –

Someone just fucking shoot me. Seriously, I got wasted on mojitos* and passed out in the sun. (* Cuban beverage containing vitamin A, B12, and powerful intoxicants and properties to enlarge feet and buttocks).

Now I’m lying here basted in fifty dollar sunburn lotion by the bar and I’m just going to stay pissed until either I fuckin’ die or the nightmare ends. They really should warn you about those goddamned minty drinks, don’t you think?

And every ten seconds some little bitch in a thong shrieks “VOLLEYBALL!” through a megaphone right into my peeling, spinning sanity.
We’ve been here three days and already my brain is closing down like Allentown.
I tell you this is a hot country – muy piquante, my friend so you better like sweating. And the food is shit, straight up. Zero flavor in anything and I’m not exaggerating.

Is there no commie ketchup for fuck’s sake? What is wrong with you people?
I’m in Cuba, by the way, with my idiot friend Terry from my junior high school days (we were on the same tetherball team) who thought two weeks at an all-inclusive on the surface of the sun would be a good idea.
We rented scooters on the first day and rode into Havana with our guide, a cadaver-thin hombre named Rudolpho who didn’t show us the city so much as rob us at knifepoint.

Thank god our Swedish passports were back at the resort, but we got fleeced for our cash and the scooters so we had to hitch a ride.
And thank god Terry speaks a little Cuban, so we hopped on a pork farmers’ truck and we were soon back at the villa stinking like shit-covered bacon.
The only thing I remember about Havana was everywhere seeing giant pictures of Ringo Starr wearing a raspberry beret, none of the other Beatles – which I thought was some weird commie thingy.
Day two found us staying much closer to the bar – which is how I managed to fry myself like a cheap strip-loin, while Terry frolicked in the pool and serenaded the local senoritas with songs from Mama Mia.
The very beverage  that crippled me is now numbing the red-hot agony that wraps me like a snug little barbequed blanket. So with eleven days left to go in this jaunt abroad I got nowhere to go but up.
Next time we’re going somewhere cold. Like New Zealand. Or England.
And we’re STILL NOT PAYING FOR THOSE DAMN SCOOTERS!
Oh-oh…head-rush …

A bit of a toff, really, Admin inhaled the classics early. His ears are ringing and he plans...to answer them.
View all posts by admin →
This entry was posted in Ordinary People and tagged Backpackers, commie, cuba, havana, holidays, pool, raspberry beret, ringo starr, scooters, the brutal times, vacation, zesty. Bookmark the permalink.