Seafaring: An Exploration of All Things Nautical 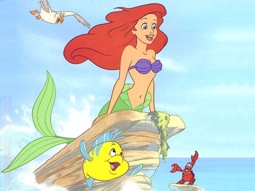 By Bertie Rusenstrom, (Special to The Brutal Times), TORONTO – As a young girl growing up in central Saskatchewan, the ocean has always held a fascination for me. Indeed, I felt my heart strings stretched to breaking each time I managed to catch a brief image of a curling surf in the wall of televisions in my father’s occult bookstore.

This lifelong love of the sea has lead me to all manner of places where I can diligently pursue my love of the briny deep and those who choose to cast their spirits adrift on its’ slippery, wet and wild peaks.

As a non-swimmer who doesn’t drink and lives nowhere near the ocean, you may think me somewhat limited in my quest to get a little closer to the glorious underwater kingdom, but fear not, land-lubber! Before long we shall both be hand in hand bent over the reeking sneakers of Davy Jones himself as we observe his newly-opened locker!

But first to table, as we explore the delicious array of fish and chip shoppes in this once fervent port city, Calgary – or Cal Gary, as it was originally named, after the great fish n’ chip master who lived inside a Shetland whale for an entire decade just because, in his own words “I could”.

Cast off and hard to leeward!

I wanted to begin with a favourite of mine. Barry’s has been around since the seventies and still maintains a Dick van Dyke feel inside with plenty to trip on. (I’ll leave it up to you, Dear Reader, to determine whether by that I mean trip on psychedelic drugs, or fall over something and bash your body).

They only use beef drippings in their deep fryers which give their fish it’s characteristic beefy drippy taste and deepy-friedy crunch.
The only waitress in the place is Millie who’s been here virtually since opening and addresses each new table of fish lovers with a cheery “Fish n chips?” as if there was anything else on the menu. Once an over caffeinated woman cried out in response “No, f—ing Peking duck you stupid b—-, what do you think?!”, which I thought was terribly rude.

Barry’s has take out and delivery service till 2am for you night hawks and although the real Barry was murdered years ago for his iPod Touch by teens, the new manager Mike DeKoustachebhjalj-Wheatner does a great job. Make sure you avoid the mushy peas or you might toot your way through church. Mercy!

Here’s another outstanding hotspot with a slightly larger menu for those with a broader pallet, subject to sudden mood swings. For example, if the Royale Haddock Platter doesn’t whet your appetite for deep fry then perhaps a micro-waved personal pizza is more to your liking. But eat it quickly! They can stiffen up pretty fast – the pizzas, that is.

There are also sides of flavoured mayonnaise available, like curry, tangerine and liquorice which make for a zesty duet with both frites and poissont.

There is no table service as one orders through a portal in the wall and receives one’s meal via dumb waiter on the lower floor. One also dons an airtight seaman’s nautical helmet when one is told and bows deeply in thanks for all assistance and services rendered by staff and their ladyfriends. To hesitate is thought-provoking but usually ends badly, especially for those inexperienced with handling kitchen knives.

La Fish n Chipz- 87 Riegel St. Toronto
Creators of the uber-succesful La Donut two years ago, the Roidy brothers, Nickel and Dino, have re-emerged with their take on the royal couple of the food world after bacon and eggs, the chip and the fish.
Dino kindly shed some light on his motivation, when I approached him in the parking lot.
“Yeah, we spelled it with a z, right? Cause we wanted to take donuts and make ‘em different, right? And I think, y’know we did that and now we want to take fish and chips to the next level of the game, know what ‘m sayin’?”

No Dino, I don’t but thanks for trying and thanks for making such delicious fish and chips. Pretty good for an inlander! But I’m joking of course.
Be that as it may, and it certainly is – as you can plainly see, there are myriad ways to enjoy the fruits of our vanishing mainland without ever getting near a large, unsafe body of water.
But if you do, be sure to wear a life jacket no matter how cumbersome it may seem.
Hoist the topsail and away!

A bit of a toff, really, Admin inhaled the classics early. His ears are ringing and he plans...to answer them.
View all posts by admin →
This entry was posted in Hollywood Pap, Latest Brutality and tagged all things nautical, calgary, Canaduh, donuts, fish n chips, la donut, ocean, saskatchewan, seafaring, the brutal times, toronto, unsafe bodies of water. Bookmark the permalink.

2 Responses to Seafaring: An Exploration of All Things Nautical