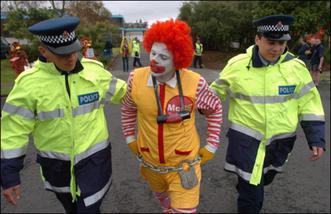 By Grande Chef Otto, TOKYO- As world food prices soar and balloon out of control prestigious Caribbean think tank MyGoodies is reporting that on site inspections conclusively indicate that 2 McDonald’s cheeseburgers are cheaper than one double cheeseburger.

“We found that two McDonald’s cheeseburgers were cheaper than one double cheeseburger,” said MyGoodies representative Desmond Malot. “This was not only true for one McDonald’s restaurant, but for many, many of them,” he added.

Even Greenland, which is officially a vegetarian kingdom, purchases three trillion billion US dollars worth of cheese and double cheese burgers on the sly every year ( 456 Canadian dollars). The burgers are flown in under cover of darkness and parchuted individually to black market herdsman and their minions.

“There is no arguing that MyGoodies, yet again, had done a bang-up job with this landmark report,” said Canadian Prime Minister Cock Blocker, who was chosen as the G-8 nation member representive to meet with Malot on his boat to discuss the findings.

“The worldwide food crisis is important, and we have to see that people eat,” added Blocker, who commented also that he felt the efforts by MyGoodies had been well worth the 899 million US dollars (37 Canadian dollars) spent by the G-8 to finance the twenty-five year research study.

“Do I think it paid off? Hell, yeah,” Blocker chortled.

GCO is a third generation Grade AAA Grande Chef, whom has served France with distinction since first garnering the honor in 1963.The title of "Grande Chef" is bestowed by the prestigious Paris L'Ecole du Piscine Noir uponst those rare experts in the culinary arts willing to take unprecedented risks in the pursuit of achieving gastronomic perfection. He is also the proud owner of the award-winning bistros Ssh..Kebab, and Pasta La Vista.
View all posts by Grande Chef Otto →
This entry was posted in Featured Brutality, Grande Chef Otto and tagged 2 McDonald's cheesburgers are cheaper than one double cheesburger, canada, cockblocker, food prices, G-8, Grande Chef Otto, Japan, mcdonald's, thebrutaltimes, tokyo. Bookmark the permalink.