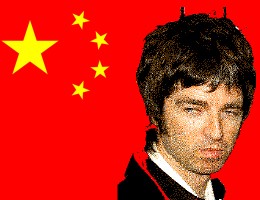 Angry fans turned over cars and houses. Looting continued worldwide. One lady, Ms Norma Hall, 42, used the ensuing chaos as an op to abandon her moral conscience. “I got drunk , put on an Halloween mask and went online,” she said, vaguely.

Turkey, Japan and Canada had reported like a while ago that Gallagher, known for his boyish resemblance to The Beatles and vegetarian diet, had jumped ship.

“Canadian news is lies, basically,” ejaculated Ray Goolens, refusing to give his age lest it interfere with picking up. “China is the best country, and we should all follow their shining example in everything,” he went on.

Better than nothing, DJ Salinger shakes it where the sun don't shine. BT' s resident recluse on the loose, Salinger is the trouble with this generation, begging the question, What is the sound of one fist bumping?
View all posts by DJ Salinger →
This entry was posted in Thinking Man's Rock and tagged china, CONS, dj salinger, noel gallagher, oasis, ray goolens, shanghai, shock rock, the beatles, the brutal times, Thinking Man's Rock. Bookmark the permalink.