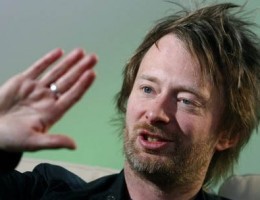 The mythic album “Thom Steps Out,” was recorded at the height of the Heads’ radioactive career, just after the release of their semen album, “Pablo’s Honey” in 1986.

Producer Phil Spector who is now in Sing Sing Prison in Los Angeles’ Sing Sing Correctional Facility receiving guidance oversaw the missing of the album’s laff track and pointed an AK-47 at Yorke during most of the album’s fourteen month long session.

“Phil misplaced the master tapes, apparently leaving them under a box of Kleenex,” confirmed Spector’s buxom bride Rachel Spector. “I came across them one day when I was looking for something with which to blow my nose.”

At that time Ms. Spector had the flu.

Details of the triple album are sketchy but a debate is raging online on such great social networking inventions as FaceBook and Fluffer and Hotmail.

Many in Iran took a time out from revolutioning to Fluff and Face online in search of track listings or illegal download opportunities from Mr. Yorke’s recording.

“When I download an album illegally I express my freedom,” said Larry Wilson, 35, a barista at a Tehran Starbucks.

Likewise North Korea’s head honcho Kim Il Jong was absent from war strategy sessions for most of the afternoon and rumored to be online himself conducting Google searches for the Thom Yorke laugh bonanza.

“Kim Jong has the funniest sense of humor in the world,” intoned North Korea’s official news agency, Reuters. “He is much funnier than Obama, who is wooden, awkward and uptight,” it went on.

Although The Brutal Times has obtained a copy of  Thom Steps Out and listened to most of it while vacuuming the apartment and texting various people and totaling up the household bills, it would be improper to reveal much about it, less you refrain from its purchase and decline Mr. Yorke’s record company of its blood money.

But here’s some of what you can expect:

AUDIENCE: (tittering, no response to query)