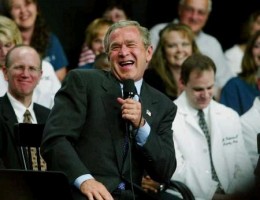 By Barry Hussein, LOS ANGELES – Industry fashion plate Neck & Penis have embraced Bush in areas where the majority of others have shied away, according to a new report published by prestigious Caribbean think-tank MyGoodies.

“Neck & Penis, despite widespread dislike of the former president, are readying several controversial ad campaigns featuring Mr. Bush wearing the tight-fitting garments designed only to fit a straight man’s neck and penis,” asserts one paragraph in the beautifly-bound report which features gold leafed pages and a dark milk chocolate portrait of Bush on the inside back flap.

“I love fashion,” he said in a recent interview with Dogs and Cats Magazine (disclosure: Dogs and Cats is The Brutal Times parent company as of May this year), “and these guys just kind of caught me at the right place and the right time,” he went on.

Neck & Penis designs are worn by fashion risk-takers across the straight world, and according to MyGoodies now is a perfect time to invest all your money in Neck & Penis stock.

“You should cash in your pension ’cause you’re never going to get any place with that,” advised MyGoodies temp Fenton Diu. “Even if you can steal a bit of cash from your sister’s wallet – you put that into Neck & P too,” he went on.

According to online superstar Business Jesus Neck & Penis have gone from exhibiting zero growth in 2007 to “becoming the biggest clothier of penisware in America other than Sears.”

A ferocious intellect, Barry Hussein is not for everybody. Twisting and frugging the nite away, Hussein entices us to sniff his mink sweatpants. Covered in cake, he muses, "Sometimes the hardest sweatpants to fill...are your own."
View all posts by Barry Husein →
This entry was posted in Presidential Daily Brief and tagged barry hussein, bush, Business Jesus, mygoodies, neck & penis, neck and penis, sears, the brutal times. Bookmark the permalink.

One Response to Neck & Penis Close to Bush, Report Says