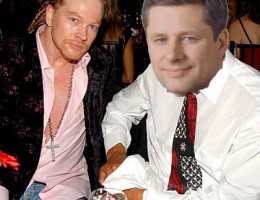 So, seriously I know it was him!

I prefer to camp alone because my job is shit and my wife’s a bitch and she hates camping. I like to come out as soon as the locks thaw out enough to get the doors open. So I grabbed a nice little spot near the out-houses ‘cause when you put away the burgers like I do, ya gotta be near the can.

So I’m just opening my first brew when I hear this guy pull into the space next to me, right? And he’s got this, like HUGE trailer with a big N’ logo on it, right? I thought WHOA!, y’know?And he’s blarin’ “Sweet Chile O’Mine” on his radio too, right? So how many clues do I fuckin’ need? And sure enough out gets this big red haired dude in a Leafs* jersey, right?

Got a little bit of a gut like me, big fuckin’ red beard and he gets out and yells “Awwwwyeeeahh!! Knockknockknockin’ on heaven’s dawwawww…!!” So I yells “Hey dude, wanna brew?” and he yells back “Fuckin’ right!” and that’s all the proof I needed!

So we totally hung out for three days just drinkin’ smokin’, blarin’ tunes, it was awesome! I kept freakin’ out like fuck man! I’m camping with friggin’ Axl Rose! And he kept calling me Slash which was REALLY cool! I got into it. I don’t think anyone else noticed it was him until he got up on the trailer and started screaming “I’m Axl fuckin’ Rose maaaan!!” every night about eleven thirty till about two.

That’s the only time I got a bit freaked, so on the last night Don Henley, who I almost didn’t recognize in his skintight Mountie uniform, came and got him down and had him tossed out for being a pain in the ass.

I just stood there thinkin’ man, that was fuckin’ Axl Rose, man, and no one’s gonna believe me. I tried to get his autograph but it says something like Darryl Dubien or something.

Must be a stage name.

He reeks, too, just so you know. Just fuckin’ foul, if you really want to know the truth about it. Like a Buffalo’s poop chute.

(*“Leafs”- the Toronto Maple Leafs were a prestigious Canadian based skiffle group now famous for being killed by teens while performing.)

A bit of a toff, really, Admin inhaled the classics early. His ears are ringing and he plans...to answer them.
View all posts by admin →
This entry was posted in Presidential Daily Brief and tagged axl rose, camping, canada, cock blocker, cockblocker, guns n roses, the brutal times. Bookmark the permalink.