Who Declares Flu a Pandemic 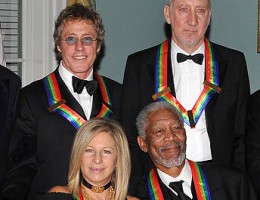 By DJ Salinger, NEW YORK CITY – Roger Waters and Pete Townshend of The Who declared swine flu “a pandemic” today at an historic concert/lecture given by the two towering talents at New York’s fantastic United Nations.

“It’s a pity Ozzy (Osbourne – the band’s singer) couldn’t be here with us today to unveil these statistics,” said Waters. “He loves statistics and even more than loving them he loves to mouth them and make the sounds they make,” he went on.

Osbourne was apparently in France giving a lecture to right wing think tank MyGoodies regarding stuff.

The swine flu/pig flu thingy is a top news story.

People think it’s important. Or at least the media does.

“It’s a pandemic,” said Mr Townshend, 87, who plays lead guitar and synthesizer in the group. “People should wear a mask.”

One woman was unconvinced.

“Bacteria lurks everywhere,” Waters explained. “A bacteria about the size of Colin Powell’s pinky or naughty bits could enter your body’s openings at any time and infect you,” he went on.

“And plus there’s this pig flu thing,” he added.

Broke people, those getting it on a weekly basis and those not got so worried at that news.

“Jeez, what am I gonna do?” pondered Newt Blam, 31, a part time barista. “How’m I gonna afford a mask when I got debts to pay and then I’m probably gonna lose my jobbie and then I can’t afford to buy no one drinks so I got no chance of picking up at the bar and, and,” he went on, hurling himself under a train.

“Get the mask,” advised Mr. Townshend. “In Japan they find them sexy.”

Better than nothing, DJ Salinger shakes it where the sun don't shine. BT' s resident recluse on the loose, Salinger is the trouble with this generation, begging the question, What is the sound of one fist bumping?
View all posts by DJ Salinger →
This entry was posted in Sick Bay and tagged dj salinger, doomsday, global recession, gloom, health advisories, Japan, ozzy, ozzy osbourne, pandemic, pete townshend, roger waters, Sick Bay, the brutal times, the who, trains. Bookmark the permalink.