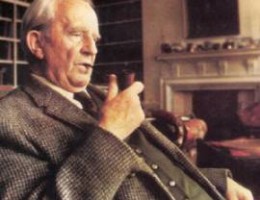 By Grande Chef Otto, NEW YORK CITY – Fans of Hogwarts are squirming more than they care to admit as town criers at Denny’s say J.R.R. Tolkien wrote a book about onion rings.

“First of all, it’s not ‘Hogwarts – it’s Middle Earth,” whined Hogwarts fan Heather Bille, 50. “What’s more is the hero whom created Middle Earth, J.R.R Tolkien, was also secretly a lover of fast food,” she went on, not blinking.

Krispy Kreme donuts were not invented until after Tolkien disappeared, in 1984 (Tolkien, not the donuts, they were invented in 1991 and disppeared in 1998). Krispy Kreme are the best donuts and are jolly good for dieting.

Full disclosure: Each time we say Krispy Kreme we should get 5,000 US dollars. If there were justice in the world, which there is not.

Anyways, Tolkien loved that stuff but couldn’t risk disclosing his interest for fear of losing his hardcore fans.

“Could you imagine!?!” shrieked Frodo fan Fred Gim, 34. “Tolkien would’ve been shown the fool!” he went on, his eyes popping out like eggs.

So, is the onion book any good?

“Actually, this thing is one of the best books we’ve had in the better part of fifteen years,” says publisher Matsumoto Boy, 30, whose publishing house and lifestyle conglomerate BB Fun Corp is issuing “I Like Yummy Onion Rings” in June of next year.

Why the wait, if it’s so good?

“The book is a monster; it runs over sixteen hundred thosand pages, and it’s written in Aramaic, Mel Gibson’s language, so we have to get him in to translate it and it’s going to take almost the entire forest of Greenland to supply the pulp for the pages, so we’re really giving ourselves a wide berth when it comes to getting the book out,” Boy explained.

How about getting Mel Gibson to fell the trees for you? Then you could cut your workforce in half.

“Well, thanks for the unsolicited advice, but we’re planning to have over thirty thousand child laborers fell those trees as they can run real fast if anyone from Parks n’ Rec tries to stop ’em and they’re not subject to so many laws as you or I.”

Point taken. Are there any other spoilers you could send our way? Somebody who dies in the end and so on?

“Well, it’s going to shock a lot of people; there’s no story; it’s not a cookbook. It is about a ring, but that ring is onion, and no one is chasing after it.”

Is it about the joy of eating?

“Look, I can tell you one thing, but, and possibly this is only for the best – I really have to limit myself to this, but apart from the title, there’s no mention of onion rings anywhere in the book.”

Is it a serious book?

How much does it cost?

“It costs twenty-five million billion dollars, and you must pay that in cash when the book is handed to you in its plastic baggie down the alley.”

GCO is a third generation Grade AAA Grande Chef, whom has served France with distinction since first garnering the honor in 1963.The title of "Grande Chef" is bestowed by the prestigious Paris L'Ecole du Piscine Noir uponst those rare experts in the culinary arts willing to take unprecedented risks in the pursuit of achieving gastronomic perfection. He is also the proud owner of the award-winning bistros Ssh..Kebab, and Pasta La Vista.
View all posts by Grande Chef Otto →
This entry was posted in Grande Chef Otto and tagged alley, aramaic, bb fun corp, books about onion rings, dennys, Grande Chef Otto, hobbit cuisine, hobbits, j.r.r. tolkien, krispy kreme donuts, matsumoto boy, mel gibson, plastic baggie, the brutal times, the hobbit, the lord of the rings, town criers. Bookmark the permalink.

One Response to J.R.R. Tolkien Wrote a Book about Onion Rings