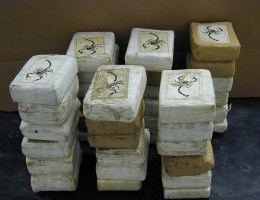 By Barry Hussein, TEL AVIV  – Canadian Embassy staff here are reeling from the discovery that a mysterious white powder found in an envelope sent to the embasssy is not cocaine.

“We wanted to snort it so bad,” ejaculated Bismark Suffolk, 20, an immune diplomat who heard about the powder. “But they said they weren’t sure it was cocaine, so we’d better not,” he went on.

No one contacted by The Brutal Times had a clue whut the powder was or where they were.

Full disclosure: The Brutal Times only thought about contacting people.

Still, other underground bloggers at CNN and the rest lost interest soon after it became known that some cute pet stories had been leaked by WikiLeaks.

“It’s a no-brainer,” quipped Hazel Badge, 8, a stringer for InfoSandwich News Services. “Unless that powder’s going up a cute puppy’s nose, people are gonna lose interest faster than you can say “Don’t taze me, bro.”

Or are they, bro?

A ferocious intellect, Barry Hussein is not for everybody. Twisting and frugging the nite away, Hussein entices us to sniff his mink sweatpants. Covered in cake, he muses, "Sometimes the hardest sweatpants to fill...are your own."
View all posts by Barry Husein →
This entry was posted in Presidential Daily Brief and tagged barry hussein, cute pet stories, don't taze me bro, mysterios white pwder, mysterious white powder not cocaine, Presidential Daily Brief, the brutal times, wikileaks. Bookmark the permalink.