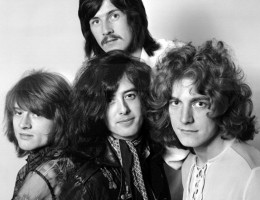 By DJ Salinger, LAS VEGAS – In a shockingly awesome turn of events, after months (years?) of extended refusal on the part of Led Zeppelin singer Robert Plant to rejoin the band, remaining Zeppelin members Jimmy Page and John Paul Jones finally figured out a way to sort of change his mind.

“Every time I’d ask Robert to give it another go as Led Zeppelin and hit the road for a grueling world tour he’d say no, and beg off, citing the fact that he’s 80 now and can barely move, let alone sing or lie awake for nights on end in the back of a van for months on end,” quipped Zeppelin bassist Jones, who at 76, is the baby of the band. “But then one night Jimmy said he’d seen a bunch of geezers down at the pub covering Zeppelin songs and I thought, that’s it – what if we just ask him to do a cover band of the songs?

The nutty idea seems to have worked as “Led Zepplin” have started playing shows after they get off work from their day jobs as security guards, baristas and so on. Page says if they can get a following they may tour the tiniest most crap parts of England in a small van and constantly fight over the proceeds of each show.

Asked if Zepplin might whip out any other covers by different bands, Page said he and Jones had been “thinking about maybe doing some early Rush” but that Plant had, perhaps predictably, vetoed it.