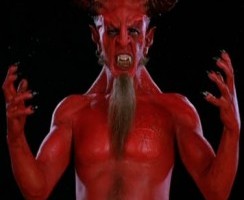 By Daemon Mailer, KEY WEST – In a classic double-cross, Satan will succeed former Black Flag vocalist Henry Rollins as CNN’s go-to gadget guy. After learning Mr. Rollins had sold his soul to get the plush CNN jobbie, former Rollins fans Twittered Satan to whine about it “so many times it really ruffled my feathers,” according to the Big Red One himself.

Checking his files, which for such an old-schooler as Mr. D. means “I just look at what I tattooed on my arm”, Satan saw that rockin’ Rollins had acted a tad dishonestly when he agreed to sell his soul last month at Denny’s to get the CNN gig.

“I saw that Henry had sold his soul twice before – once for the Gap, back in the early ’90’s and once for Vanity Fair – when he became their go-to travel guy, just a few years ago,” Satan confirmed, “so the CNN thing…I dunno…it just seemed a little much for one soul”.

Indeed, if one looks at any Devil literature it becomes apparent that selling one’s soul to become a “gadget guy” is the lowest of the low.

“It’s lower than saying, ‘Satan, my dream is to be an ESPN sports guy’, quipped Led Zeppelin guitarist Jimmy Page, who was in the Brutal Times article next to this one and just stopped by.

Hey, how did you do that?

Huh. Well, the thing of it is, and you’ve probably guessed it already, Dear Reader, but – like, isn’t it even more of a disappointment that Satan is gonna be the gadget guy at CNN?!?

“Define ‘disppointment’. I mean, couldn’t you have done a better job of setting up your punchline? You could’ve a least had another person other than the writer slip it in hisself.”

“The point you’re beating everyone over the head with, at 300 words now, being that things are so bad now that even the Devil might sell out for some crappy job with a whiff of celebrity attached to it, am I right?”

No no no no no. It’s up to the reader to incept from the article whatever they or they want to. Honestly, I’m not even sure what I was trying to say, or if it even makes any sense. Plus…I bought the gadget Rollins was selling, although I don’t really need it. There was just something…about it…that said “we belong together”.

Sweet little Daemon Mailer invented the internet in his garage while he was trying unsuccessfully to invent the first rental video store. Like the rest, Daeme is also making moves to cash in on BT's success and avoid eating peanut butter out of a jar livin' in his car the rest of his life. All during the night as he wiggles to an 'fro, some kinda machine records his thoughts, churning out a pile o crud to be compiled in the forthcoming tome, “I am Spam.”
View all posts by Daemon Mailer →
This entry was posted in Ask Daemon Mailer and tagged black flag, daemon mailer, henry rollins sells out again, jimmy page, led zeppelin, satam to become cnn's new gadget specialist, the big red one, the brutal times, the Devil, the gap, twitter, vanity fair. Bookmark the permalink.