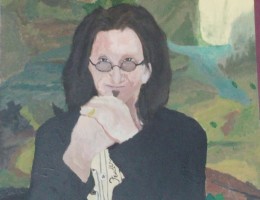 “The troll responsible for minding the Geddy Leesa was instead found drunk under a bridge, living the stereotype, shall we say,” ejaculated Constable Constantine Constantinople, 56, of the S1W, whom have been in charging themselves of the case since they heard about it after breakfast.

Trolls everywhere denied CCC’s remarks and claimed instead “It was them hermits that done it.”

“It was them hermits that done it,” said Trey Bandenhoevel, 30, a troll.

Done what, John? Done what?

“That done lost her, mate.”

“The bleedin’ Geddy Leesa, that’s whom, you bloody fool. Now look what you’ve done – you’ve gone and made me spill my noodles,” he went on, warming to the subject.

Indeed the noodles were indeed spilled. Plus, the Geddy Leesa, a stunning self-portrait of the stunning Rush bassist Geddy Lee in oil, is worth over a hundred billion pounds in British money, making whomever snatched it a rich enough to run amok for years on end.

“Whomever was lucky enough to snatch the Leesa probably won’t have to work another day in he she it’s bloody life,” quipped Basil Rathbone, a longtime art-lover and visitor to the Louvre, France’s cutting edge art gallery. “Not like me, who’s got to get up every morning and drag his or her sorry arse…”

All right, all right.

But is it like even known that the Leesa was stolen? What was all this then about it being “lost, missing or stolen”?

“Lost” is British English for “missing”, which is Canadian English for “la maison blanche”, which is a euphemism for the man’s pee pee,” ejaculted Patrice Hey, 24, an hedge fund manger at Billy’s Bank.

So…why are the fuzz focusing on “stolen”?

“It’s less problematic and they like that about it. I think, also, that we as a people instinctively gravitate to the worst case available in any choice string made available to us.”

So what should people do if they see the Geddy Leesa?

“Well, firstly, don’t look in it’s eyes. The Leesa has an long infamous history of driving its viewers round the bend.”

Most of our readers are going to want to know if they find the Geddy Lisa if they get to keep it or not.

“According to French law, only someone from the ruling class or the nobility may keep a lost missing or stolen progressive rock artwork.”

Whatever happened to the troll whom lost, missed or stole the Leesa?

“He lived happily ever after.”

Really. And the hermit?

“I dunno ’bout him. Haven’t seen him ’round recently.”

Better than nothing, DJ Salinger shakes it where the sun don't shine. BT' s resident recluse on the loose, Salinger is the trouble with this generation, begging the question, What is the sound of one fist bumping?
View all posts by DJ Salinger →
This entry was posted in Thinking Man's Rock and tagged billy's bank, dj salinger, geddy lea, geddy lee, hermits, live the stereotype, progressive rock artworks, rush, S1W, the brutal times, the geddy leesa, the louvre, Thinking Man's Rock, trolls, trolls vs hermits. Bookmark the permalink.