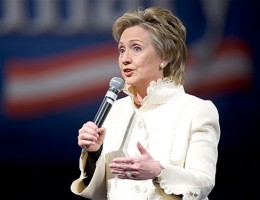 By Styles Cradgerock, TEXAS – Hot on the heels of the crushing body blow delivered to the U.S. President, the American Barack Obama by his party’s mid-term election upset, the question on everybody’s chapped lips is, “Will she run?” (“she” being Hillary, and “run” being for Mr. Obama’s current jobbie as leader of the free coffee world).

Town criers and barely able to function baristas peppered Mrs. Clinton, whom also goes by the nom de plume Hillary, with questions about her height, favorite foods, and iPod contents. But the pleasant atmosphere was predictably shock-rocked when Clinton received an unscreened question via the fabulous Internet social networking service Fluffer, asking yet again, if she will run for president in 2012.

“No, no, no, no, no – No I will not,” Mrs. Clinton insisted, in response to the unscripted Fluff, sent by Chinese democracy dissident Richard Penn, 51, who is serving a life sentence somewhere in the People’s Republic for once upon a time in 1997 advocating a 2 party political system.

“How about in 2016?” pressed Brutal Times intern Pfaff Onclear, 15, in between bites of a medium chicken falafel.

“Well, there – as you know, Pfaff – that looks delicious – there probably isn’t going to be a 2016, but if there is I certainly won’t be running for president at that junction, Pfaff.”

And on it went. The questions come at a potentially sensitive time for Clinton, whom like anyone anywhere has a sensitive side, and when you get right down to it, prefers routine and structure to leading an unscripted life of threesomes and prescription drugs. Plus, as with so much somewhere, some things happen, get forgotten and maybe happen again? All afternoon, and into the next day, and the wee hours of in your face, shouts were heard and meanings to them were assigned, dropped and reassigned. And then… just as everyone had given up and was ready for a bedtime snack I remembered how there was no other choice other than Sarah Palin and McCain for president, since America certainly is never gonna elect a Romulan.

“And so will I – but you haven’t answered my question, lady”

“Well, I think – with all due respect to your question, Mr. Cradgerock – and that cheese falafel looks delicious – I think it’s too early to…to start talking about 2110, and things that are…a hundred and one years down the road.”

“Well, I think it is something that, given the right set of circumstances, and if there was some way Barack could be totally humiliated and made to apologize in some eternal way, that I would consent to do that.”

Closely following the rules of Pythagorus - to abstain from beans, not to pick up what was fallen, not to eat the heart, and refusing to look in a mirror after midnite, Cradgerock gets all up in the grills of all the world's leaders and their pets like you knew he would.
View all posts by Styles Cradgerock →
This entry was posted in Stories For Bottoms and tagged barack obama, baristas, body blow, chapped lips, fluffer, hillary clinton announce 2112 presidential run, ipod, john mccain, mitt romney, Presidential Daily Brief, romulans, sarah palin, styles cradgerock, the brutal times, U.S. midterm elections. Bookmark the permalink.