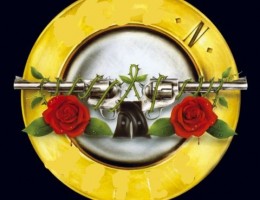 By DJ Salinger, LOS ANGELES – This city of Angels, made popular by the once popular Red Hot Chili Peppers, was shock-rocked late this afternoon when Horace the town crier, who has replaced the LA Times as the most-often consulted news source, cried “GN’R change name to N’, GN’R change name to N'”.

As you know, popular hard rock group Guns N’ Roses was started in the 1980’s by members of two of LA’s biggest bands – LA Guns, and Hollywood Rose. The bands featured among other musicians, Traci Guns, on baritone saxophone, and Axl Rose, on vocals.

Yes, history is fascinating in the way it repeats exactly minute for minute, as it did in 1982 when to deal with the recession US president Ronald Reagan ordered bands to merge to save electricity, time, money, and to generally free up space. Yey, verily Guns N’ Roses was born.

But then it became 2008 and people woke up from that wonderful 1982 dream and saw to their horror  – Chinese Democracy.

“Yeah, people got angry ’cause you know on CD there’s no Slash, there’s no Duff, and there’s certainly no Tracy Guns,” explained Jazz Man, 60. “So, obviously, what you got now is Axl, who’s the sole remaining member so to speak, and he’s caving in to pressure ah to punish himself for putting out that uneven album,” he went on.

And when I think of N’ I really think of NIN – y’know, Nine Inch Nails. So wouldn’t that be just adding more confusion to the frogpile?

“Well, NIN aren’t really very popular. If they do have a problem with it, I suppose they could always change their name,” Jazz Man suggested.

Are band names really so important? I mean, is The Beatles such a good name? The Rolling Stones? Mozart?

When I listen to tunes on my iPod I never even look at the names of who’s playing; it’s just music. Who cares who it’s by?