Shocker: You Can See a Girl’s Ass with Low Rider Jeans 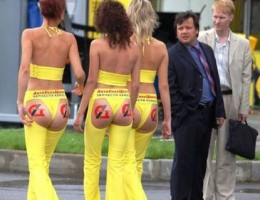 By Smia Oots, NEW YORK CITY – Warning: Portions of this article are unfit for those adverse to being shock-rocked. Make sure you’re sitting down before continuing further.

Millions of pairs of popular low rider jeans like the type Britney Spears wears are being recalled due to the shocking revelation that the jeans reveal large portions of the wearer’s ass to the viewing public.

Let me try that again – If you wear low rider jeans people around you can see your ass crack hanging out.

Investigators from Canada alerted their American friends that they “can see your ass crack” on more than 67,878,986,098 occasions last month, according to prestigious Carribean think tank MyGoodies.

In Canada low riders are eschewed (shunned, not chosen, deselected etc) by folks because they have high morals. Like the awkward daffy prime minister, Cock Blocker, most wear snow pants stuffed with wads of cotton batten.

Anyway, people are suing of course.

“I want ten million dollars – right now,” sobbed Clarice Mustange, 20 of Baltimore, who says she learned from Vernon, Baltimore’s town crier, that her bum had been viewed by thousands of folks during her many jaunts about town in her waking hours.

“I want that money, now,” she wailed. “Because my innocent mind was destroyed by these jean-makers,” she went on.

Jean-makers, or “jeans-makers” as they are known in Houston, Virginia and Montreal, Canada, are boarding up their businesses and donning silly-looking disguises to avoid being harmed by infuriated victims.

“Yeah, but they’re pretty easy to spot,” says Houston hipster Neal Binghoff,30. “I mean they all look like Joaquin Phoenix – with the sunglasses and the beard thing.”

Then again, so did he.

Smia Oots is a free-floating wild card racked up on painkillers and an automated sequence of commands who came to Tokyo to pursue her interest in social drinking. Always in search of new moments that can only live on in recollection, Oots asks we put the Enlightenment behind us, stat.
View all posts by Smia Oots →
This entry was posted in Schadenfreude and tagged ass crack, britney spears, canada, cock blocker, joaquin phoenix, low rider jeans, mygoodies, schadenfreude, smia oots, the brutal times. Bookmark the permalink.

One Response to Shocker: You Can See a Girl’s Ass with Low Rider Jeans