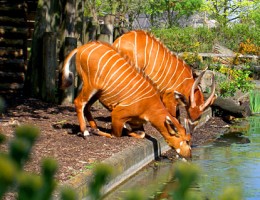 By Smia Oots, LONDON – As members from the G-20 gathered up their satchels and moved their drinks carefully away from table edges and other popular spill zones British Prime Minister Gordon Brown shock-rocked fans with news that animals will get their own Internet by 2010.

Animals are increasingly pressuring humans for Internet access following the release last year of funky iPods and so on. Organizers of the G-20 shindig made the mistake of holding their conflab right next to the London Zoo where many animals live work and hang out in their free time.

“kskdadJMK98787??rufff!” commented a terrier named Werner. “okjjUUU/,kdkdirufffff!” it went on.

“Animals are going to totally shock-rock your silly suburban iPodular world,” says animal-lover but not too much Ray Goolens. “When and if you’re invited to an all-animal Internet chat room and you log on – expect to have your mind blown,” he went on.

Animals have been mostly a mystery since the time of their invention, and their excess hair causes allergic reactions in some humans.

Rashes, itching, scratching etc are all big complaints about animals for humans. Thus, when Daemon Mailer, 23, invented the Internet in his spare time in his garage he decided to kick animals off.

But animals are getting their own net now, says home ec instructor Nancy Shaff.

“Animals are getting their own Internet now,” she said.

Smia Oots is a free-floating wild card racked up on painkillers and an automated sequence of commands who came to Tokyo to pursue her interest in social drinking. Always in search of new moments that can only live on in recollection, Oots asks we put the Enlightenment behind us, stat.
View all posts by Smia Oots →
This entry was posted in Disco Island and tagged 2010, animals, G-20, gadgets, gordon brown, ipod, ipod touch, smia oots, technology, the brutal times, the Internet. Bookmark the permalink.