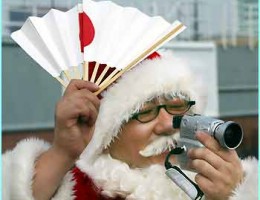 By Santa, Tokyo, SHIMOKITAZAWA – Well, Boys & Girls, it’s that most wonderful time of the year once agin when they let Santa write an article here at BT.

(Correction – this is Santa’s first article for BT, since being hired well over a year ago – Ed.)

And so without further ado it is my pleasure to to sum up the very Best of the “00’s”, the “Naughties” and some such other delightful witticisms that town criers have summed up this most delightful of decades.

(Correction – this article does not cover an entire decade; it is merely intended to “sum up” 2009.)

I for one, am surprised we done survived the milenium.

That y2k thing really had me for a loop.

The thing I remember most about y2k was wondering how I’m gonna be affected as I don’t even own a computer.

I’m still quite comfy livin’ with my black & white tv.

Best show on tv: The Simpsons

Man of the Year: Ronald Reagan

Giving to the rich and robbing the poor, once you really get to know him, Santa's more disappointing than the most grotesque sidewalk artist's portrait. Yes, we at BT were excited to bag him at first, what, back in...2009? But since then, boy, has the regret set in. Santa's limited creativity means he's liable to churn out maybe one article per year, and even then...well...just take a look see at whut he's written.
View all posts by Santa →
This entry was posted in Santa and tagged best of 2009 lists, charlie sheen, hillary duff, Santa, shimokitazawa, the 00's, the brutal times, the milenium, the millenniun, the noughties, the simpsons, tokyo, town criers, wonderful time of the year, y2k. Bookmark the permalink.

One Response to The Brutal Times Best of 2009