Giving to the rich and robbing the poor, once you really get to know him, Santa's more disappointing than the most grotesque sidewalk artist's portrait. Yes, we at BT were excited to bag him at first, what, back in...2009? But since then, boy, has the regret set in. Santa's limited creativity means he's liable to churn out maybe one article per year, and even then...well...just take a look see at whut he's written. 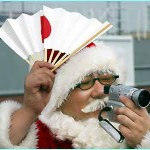 By Santa, Tokyo, SHIMOKITAZAWA – Well, Boys & Girls, it’s that most wonderful time of the year once again when they let Santa write an article here at BT.

(Correction – this is Santa’s first article for BT, since being hired well over ayear ago – Ed.)