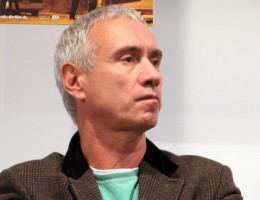 Well what’s even the point of this story!?!

(With a billion million and a half highly-literate readers crowding the Internet each day, jostling for ways out of their boring workaday days The Brutal Times has a responsibility to cater to the lowest common denominator, pandering, and showing its ample rump – Ed.)

Roland Emmerich is a German guy who made the best movie of 2009, called 2012. In 2006 he made a movie called 2009 which predicted everything that was gonna happen in 2009 but no one saw it because the yes men buried it.

(This is clearly untrue – Ed.)

In 2012 Roland Emmerich shows how Nature kills us before we even get a chance to man up and kick its lily ass.

One of the greatest moments in that movie  is when The Offspring play “Pretty Fly for a White Guy” on the soundtrack.

I tell you if we don’t man up and kill Nature we are doomed just like in that movie!!!!!!!

(Santa is the highest paid employee at The Brutal Times. His talent speaks for itself – Ed.)

Giving to the rich and robbing the poor, once you really get to know him, Santa's more disappointing than the most grotesque sidewalk artist's portrait. Yes, we at BT were excited to bag him at first, what, back in...2009? But since then, boy, has the regret set in. Santa's limited creativity means he's liable to churn out maybe one article per year, and even then...well...just take a look see at whut he's written.
View all posts by Santa →
This entry was posted in Latest Brutality and tagged 2012, nobel peace prize spoilers, roland emmerich, Santa, the brutal times, the offspring. Bookmark the permalink.

One Response to Nobel Peace Prize Spoiler: And the Winner is…Roland Emmerich!