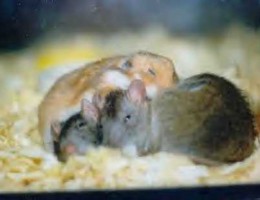 By Styles Cradgerock, LOS ANGELES – As 2009 dies the horrible death it deserves all of Hollywood is saluting global media giants CNN and Yahoo for delivering the year’s most cutting-edge in-your-face cute pet stories.

In previous years – 2008, 2007 and so on, cute pet stories tended to be eclipsed by political coverage, current events, business news and so on.

But God said from now on, “Let it be otherwise”.

The result? I said already above – 2009 was the cutest year yet for pets, online on the ‘Net, on your tee vee and so on. For pet lovers, it was truly an bonanza.

“It was truly an bonazana,” said pet-lover (but not too much) Renee Phipps, 19, an English Education major at Saskatoon University in Canada. “I’m agreeing with what you said, so why are you looking at me all weird and stuff?” she went on.

Ms Phipps and her traveling companion, Don Reyner, 13, also from Saskatoon had sneaked across the Canadian border to buy hand guns for the coming Collapse in 2012.

“We’re not one of the sheeple,” explained Mr Reyner, clutching his concealed weapon. “I don’t want a homeless trying to eat my pet, come the first of next year,” he went on.

Still, the point of this article is about the media itself. In 2009, as we look back and ponder we can respect how cutting edge in-your-face bloggers from CNN, Yahoo and lesser-known underground sites like Hotmail showed us the way with great stories about cute pets.

“Actually, not to correct you, but it is frankly incorrect to say ‘stories’ when actually what you really mean is ‘videos'”, ejaculated Ray Goolens, whom is an Internet Technology specialist. “And the amazingly remarkable thing is how these testaments to our pets, were posted on blogs around the world, not just by rad bloggers like CNN’s Amanpour or John Roberts, but by dissidents in Iran and Canada.”

But you said Canada, too.

“Well, that’s another country where they have computers.”

“I like that video where the cat gets stuck in a blanket and can’t get out,” said Iranian physicist Bill Wiggins, 24. “But it was sad that it never got out,” he went on.

“For me, the cutest pet video of 2009 was the one where the cat was stuck in a blanket,” contrasted Kate Foxxe, 21, a gorgeous philosophy student I met on the street waiting for tickets to the Hollywood media salute to pets.

“I like it’s whiskers. They were sooo cute!” she went on.

Yes, pets are cute. With God’s will and so on we’re gonna get through the rest of the Final Days etc, with a little more help from great Internet news sites and the knee-slapping in-your-face rad cute pet videos (and stories?) they bless us with!

Closely following the rules of Pythagorus - to abstain from beans, not to pick up what was fallen, not to eat the heart, and refusing to look in a mirror after midnite, Cradgerock gets all up in the grills of all the world's leaders and their pets like you knew he would.
View all posts by Styles Cradgerock →
This entry was posted in Special Report and tagged 2012, amanpour, awards, best cute pet stories of 2009, cnn, cute pet stories, cute pet videos, iran, john roberts, los angeles, ray goolens, sheeple, styles cradgerock, the brutal times, yahoo. Bookmark the permalink.