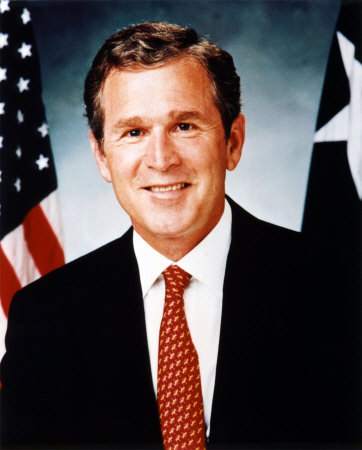 By the serge, WASHINGTON (The Brutal Times) – In advance copies of tonight’s State of the Union address obtained by The Brutal Times, President George W Bush reveals his 2003 plan to invade Iraq was “ironic,” and insists that he has been made victim by the press and other former members of his administration who “fail to understand irony.”

The yearly 42 minute State of the Union address to members of the US House of Representatives and Congress is the second highest rated television event in the United States almost every year, typically only surpassed in popularity by the final episode of the reality show American Idol. In years prior to American Idol airing on American tv screens, Everybody Loves Raymond and Full House also scored high.

“Colin, Don, they aren’t highbrow guys,” Mr Bush writes. “After 9/11, I was trying to lighten the mood up at Camp David, and- ironically, I threw Iraq out there as a possible target.”

Perhaps anticipating tough media questioning following such revelations as he makes in the address, Mr Bush explains that the reason he has waited until his final year in office to speak openly about the war has been due to his desire not to embarrass Secretaries Powell or Rumsfeld “until a significant amount of time had passed.”

“Younger people get what I’m talking about,” Mr Bush says. “Problem is, Congress is made up of old folks. I don’t talk about it much, but I spend a lot of time watching The Simpsons and South Park – shows that use irony, so I understand it,” he offers, about 25 minutes into the address. “And yeah, I like to use it too, believe it or not.”

Electronic text messages sent to the offices of Mr Powell and Mr Rumsfeld were sent back unanswered by Vera Shan Mailer, who is overseeing operation of the Internet while her love partner Mr Daemon Mailer (who is also a contributor to The Brutal Times) recovers from tazer wounds in a Toronto hospital.

“I looked for the recipients requested,” Ms Mailer wrote in a brief electronic text message to The Brutal Times. But after trying repeatedly Ms Mailer admitted her inability to reach either former Bush administration figure – “Sorry, I gave up,” she wrote early this morning.

Reactions to what some media pundits are already dubbing Mr Bush’s “Irony Defence” have been decidedly negative, with even traditional fans of black humor left at a loss for words.

“Being irreverent…I don’t know,” pondered New York shock-jock Jazz Man, who, at radio station KXFRT has made listeners squirm with his edgy wit for over 25 years, “but it just doesn’t seem like something a sitting president should do.”

Nevertheless, calls to the White House did reveal that Bush expects at least some public support for his new devil-may-care persona.

“It is true that the president has accepted an offer from a large skateboarding-clotheteria company to participate in at least some of their advertising campaign in spring 2009,” said spokesperson Dana Perino.

Although Perino would not name the company, a source close to Mr Bush who wished to remain unnamed at press time confided that the clothetieria in question is popular Los Angeles clothetier Neck & Penis. Neck & Penis produce garments and shoes specially designed only for these oft-neglected body parts. Their current global earnings are expected to surpass those of Toyota, Lego, and Proctor&Gamble.

Many in the know say that if Mr Bush accepts an advertising stint at N&P he could become rich. Richer than his wildest dreams.

“The president has fooled us before,” said veteran political commentator Styles Cradgerock, when asked for his view from London on the phone early this morning. “It’s hard for me to admit this, but I’ll have to say that with this whole irony thing, he pretty much fooled me again.”

The State of the Union airs tonight on national television at 8:00 pm.

Channeling Pascal (The source of all man's misfortune is his inability to stay in his room) the serge confides, "In my day, we didn't call them love hotels - we called them sex hotels." Begging the question, Vuvuzela avec moi, ce soir?, BT readers get so much pleasure out of his columns they...ought to be punished.
View all posts by the serge →
This entry was posted in Presidential Daily Brief and tagged daemon mailer, george bush, iraq war, irony, state of the union adress 2008, styles cradgerock, the brutal times, the serge. Bookmark the permalink.