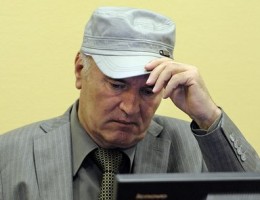 Ratko has long complained in felt marker that folks with sour grapes have often resorted to making fun of his name. Today marks the first time he took to Twitter – oh God why do we have to keep inserting the names of Twitter and Facebook into every article? It’s the biggest source of unpaid promotion ever-ever, don’t you think?- and many were surprised at the former great dictator’s savvy use of social networking technology.

One reason for Ratko to adopt a new name, besides avoiding the immature playground insults at the Hague, is that when he escapes he can start a new life.

“Ratko – Rick – is just like you and me in that he wants to be different, like,” chimed child chimney sweep Mugs McCoy, 9, round the pub. “The best way for ‘im to do that, really, is to escape out the Hague n’ go somewheres nobody knows ‘im, like,” he went on, squinting at something.

“Rick…never would’ve done the things I’ve done – been accused of doing,” Ratko wrote on his Facebook wall. “Still…growing up I was always jealous of Slobodan.”

Slobodan, or “Slobo” as his fan calls him, was President of Serbia, self-medicated, and wore Julian Assange jeans to high school.

“I wanted those jeans, but I couldn’t afford them,” a person writing under the name Rick Mladic tweeted. “They were so silky smooth – no one knew what they were made out of – it was top secret.”

Despite Ratko’s new name change, is it gonna be enough to keep folks off his trail?

“He should get out of that boxy old army uniform he’s got. The hat’s too small for his head and beige makes most people want to throw up,” ejaculated BB Fun Corp fashion guru Matsumoto Boy, 23. “I would wakeboard him and slap some magma on his face to smooth out all those worry lines from years of hiding, as well,” Boy went on.

YMCA trainer Muscleini, 34, advised Rick hit the gym and work out using the newest Beatles endorsed muscle toning gadget. “Oh yeah, everybody we get comin’ in these days is crying out for it: ‘Gimme the Ab Four, gimme the Ab Four.’ You strap it on you and it pushes your abs…right up into your throat, here, where you can feel it.”

Shouldn’t something named the Ab Four be fun to use?

“That’s what Paul and Ringo said, but John and George were against it. They wanted it to be deep, challenging.”

“Yeah, I know – they’re dead so how come they get to decide.

“Both Paul and Ringo’ve been visited by John and George’s ghosts. And I can tell you the ghosts aren’t happy about a lot of things.”

You seem to know a lot about the Beatles.

“Yeah, I read up on them, but to tell the truth their workout gear is much better than their music.”

Name-changing really is a great way to start over. Lots of people are doing it. Life’s too short to go around with a black cloud hangin’ over your head all the time.

Closely following the rules of Pythagorus - to abstain from beans, not to pick up what was fallen, not to eat the heart, and refusing to look in a mirror after midnite, Cradgerock gets all up in the grills of all the world's leaders and their pets like you knew he would.
View all posts by Styles Cradgerock →
This entry was posted in Presidential Daily Brief and tagged bb fun corp, beatles workout gadget, facebook, ghosts, julian assange jeans, matsumoto boy, muscleinin, ratko mladic changing his name to rick?, serbia wra crimes, slobodan, social networking tools, styles cradgerock, the ab four, the beatles, the brutal times, the hague, twitter. Bookmark the permalink.

3 Responses to Ratko Mladic Changing His Name to Rick?