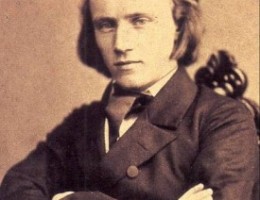 By DJ Salinger, BERLIN – Say the name Brahms and what comes to mind? Brahms, probably. But for die hard Brahms fans, the name Brahms has become synonymous with some of the world’s filthiest curse words.

Irate Brahms fan Roy Unt, who will be 205 years old on Friday, and is in potty pants, was only a toddler in potty pants when a temper tantrum prone Brahms stalked off stage at London’s prestigious 02 Arena in July 1909, swearing never to perform or record again unless he was given better sound in the monitors.

“I want…better sound in the monitors,” he said.

Unt said his hopes were raised that Brahms would release a new album  in 1997 after overhearing two drunken baristas arguing over Brahms on an all-night bus ride in Berlin.

“The one with the part in the middle mumbled Brahms was working with synthesizers and the other one, who looked smarter in his tight business attire and somewhat urban magician look, hit the dumber-looking one on the head and shouted that no, Brahms was in South Africa working with an unknown gospel group there.”

Unt has no fixed address and can’t manage to get mail sent to his car.

“That’s what we have back then.”

What can’t you tell us about the new Brahms album?

“It’s heavy on featured artists – Snoop, 50 Cent, and a whole slew of Eminem proteges you’d rather not know about.”

Is it summery, wintery? If my mate hears it are they gonna want to rip my pants off?

“Rip your pants off?”

To get at my goodies.

You’re the world’s best listener. Look, how Brahms gonna compete in a tap out with Lady Gaga, etc?

“Brahms would crush Lady Gaga in half under his piano lid and then hurl the whole mess of a cliff, would’n he?”

I dunno, would he?

Whut kinda producers Brahms work with on this album?

“Phil Spector did a few tracks. Beethoven remixed tracks 4 and 5.”

The ones with Snoop Doggie and 50?

“You do your homework, don’t you?”

Almost done. So, how this affecting cafe society?

“Thought you’d never ask. Cafes’ve shut down, basically. The streets are deathly quiet and the Ripper is out again.”

“Yes, but all their coffee tastes the same.”

Better than nothing, DJ Salinger shakes it where the sun don't shine. BT' s resident recluse on the loose, Salinger is the trouble with this generation, begging the question, What is the sound of one fist bumping?
View all posts by DJ Salinger →
This entry was posted in Thinking Man's Rock and tagged 50 Cent, better sound in the monitors, dj salinger, eminem, lady gaga, london 02 arena, new brahms album spoilers rock cafe society, prince harry, rip my pants off, snoop dogg, the brutal times, the ripper. Bookmark the permalink.