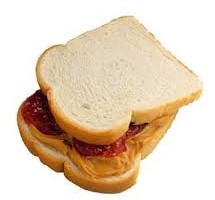 By Grande Chef Otto, PITTSBURGH – Among the many exciting predictions for 2013, younger sister of famed predictor Nostradamus, Coco Nostradamus, says  more people across the globe will eat peanut butter and jam sandwiches this year than maybe at any other year in the history of the worlds’ diverse peoples.

“They’ll eat them this year and they’re’ll be no turning back,”  Ms Nostradamus sexted, via the great social networking tool Fluffer.

The ramifications of so much more PBJ (peanut butter petroleum jelly) being consumed by the world’s diverse peoples are…what are they?

“No one you know’s going to be affected,” explained The Brutal Times’ own personal jesus, Business Jesus, 23. “But you are going to witness the steady capsize of world financial markets, leading to upackaged anarchy, ferocious animals being let loose from zoos and a number of the weak being consumed by the hungrier of those freed zoo animals, especially by the tigers.”

Peanut butter is made from peanuts after it has hatched from the butter. The chrysallis then flies away. Usually it doesn’t come back.

Workers on a farm questioned by The Brutal Times demanded to be compensated or at least given a map to let them know where they were.

Jam comes from just under the trees. You have to dig there right after it rains, and to tell the truth there’s usually worms in there that some of the bigger companies scoop out so you don’t barf when you open the jam jar. The smaller organic jam producer’s like Henry’s Walnut Sauce? They just leave them in there.

When lots of people like things the things become popular and some people make money off that.

Some pop cultures use peanut butter and jam as an holy sacrament in some kind of rite. Oh boy, so boring, right?

Despite everyone owning an iPhone on the Internet there are some guys n’ gals whom’ve never even seen a peanut butter and jam sandwich.

“True, but that’s about to change,” ejaculated Ms Nostradamus, warming to her theme, “and again, you’re not going to meet those people, and even if you do, they’re not real to you, right? Living in the era which we do now it’s all become abstracted so much that if we’re honest with ourselves we’re not going to care about people seeing or eating a PBJ sandwich for the first time, unless we’re those people, which we’re not, right?”

Have we lost something because of that?

“Yes, but we because we don’t realize what we’ve lost it’s all right.”

Do you go into a trance when you make these predictions?

GCO is a third generation Grade AAA Grande Chef, whom has served France with distinction since first garnering the honor in 1963.The title of "Grande Chef" is bestowed by the prestigious Paris L'Ecole du Piscine Noir uponst those rare experts in the culinary arts willing to take unprecedented risks in the pursuit of achieving gastronomic perfection. He is also the proud owner of the award-winning bistros Ssh..Kebab, and Pasta La Vista.
View all posts by Grande Chef Otto →
This entry was posted in Grande Chef Otto and tagged 2011 predictions, 2013 predictions, Business Jesus, coco nostradamus, fluffer, Grande Chef Otto, iphone, peanut buttur and jam sandwich popularity to soar in 2011, rob nostradamus, sexting, the butal times. Bookmark the permalink.