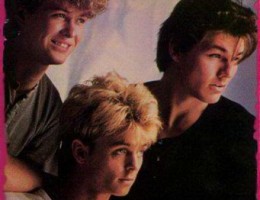 By DJ Salinger, SEATTLE – One of the most influential shock-rock groups on the Seattle grunge scene, Ah-ha, have announced plans to change their name to Uh-huh.

The change will occur on June 4th, 2011 to allow fans a chance to update their iPods before they get sued.

“No one who misspells the name is going to be prosecuted,” verified A-ha/Uh-huh’s chief legal counsel Veal McDougall III. “Until June 5th.”

“We thought about Uh-Uh for a while, ” said the band’s drummer, Lars Ulrich, “but Sammy (Hagar – the band’s singer) thought it was too negative.”

“That may change though, actually, as – don’t tell anyone, but we’re thinking of kicking him out,” Mr Ulrich went on.

“But how would you kick him out?” I asked.

Better than nothing, DJ Salinger shakes it where the sun don't shine. BT' s resident recluse on the loose, Salinger is the trouble with this generation, begging the question, What is the sound of one fist bumping?
View all posts by DJ Salinger →
This entry was posted in Hollywood Pap and tagged a-ha, band name changes, dj salinger, ipod, lars ulrich, sammy hagar, seattle, seattle grunge music, the brutal times, Thinking Man's Rock, uh-huh. Bookmark the permalink.