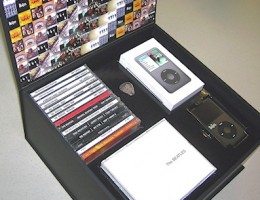 “Yeah, we finally figured out what was missing with the earlier 569,808 best of Beatles releases,” said long-time Beatles producer and confidante George Martin, from his villa in sunny Las Vegas, Sunday. “Those fucking Harrison and Lennon songs,” he went on.

“We cut ‘Come Together’, ‘I am The Walrus’, ‘Taxman’, ‘Something’, ‘Revolution’, ‘Yer Blues’, ‘Dear Prudence’, ‘In my Life’, ‘While my Guitar Gently Weeps’ and a whole slew of other losers,” confirmed Beatles engineer Geoff Emerick only seconds later, via the fabulous Internet social networking tool, Twitter.

Folks are like cramming The Beatles’ box set down their own throats they’re so overjoyed with the results of the overly-anticipated mucking about with past perfection.

“I would say, and this definition is usually reserved for Christmas, as ah, a way of sort of defining Christmas, that this box set is the very definition of ‘overjoy’, meaning ‘to experience too much joy’, which of course is the aim of our capitalist society as endorsed by President Obama,” said Ray Goolens, a shopper at Best Buy.

“Yes, the mono versions of the twenty billion Beatles tracks have been remixed so that you’ll only hear Paul and Ringo in the mix,” explained Mr Martin, who as I told you before is that guy who produced The Beatles and now keeps producing them long long after they’re dead.

Any plans for the Lennon and Harrison tracks? Can’t the be recycled, for a better world for you and me?

“Well, I may find room for some of them on my new Tupac release, but…we’ll see,” he teased.

Better than nothing, DJ Salinger shakes it where the sun don't shine. BT' s resident recluse on the loose, Salinger is the trouble with this generation, begging the question, What is the sound of one fist bumping?
View all posts by DJ Salinger →
This entry was posted in Featured Brutality, Thinking Man's Rock and tagged beatles mono remixes, christmas, dj salinger, fluffer, geoerge martin, new beatles box set, ray goolens, the beatles, the brutal times, tupac. Bookmark the permalink.