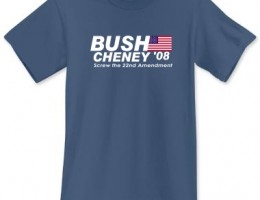 By Smia Oots, Brooklyn, WILLIAMSBURG – Four-eyed sneering running-shoe-wearing tattoo-show-offing white-skin-cladding Williamsburg hipsters have bitten onto to something and they just can’t let go!

Irony apparel is a smash hit in Williamsburg.

On my way out of the metro I bumped into 39-year-old Cassius Tam, who writes for Vice Magazine, Brooklyn’s foremost arbiter of taste. He was wearing a Bush-Cheney 2004 t-shirt.

And then, at the local butcher’s apartment I met Zoey Haff. She was wearing a big pink button that said “Fuck You”.

I was damned if I was gonna let that one pass.

And then suddenly out on the street again a group of hundreds swarmed me, pushing, screaming, pinching – all demanding my attention for their ironic fashion proclamations.

“I like Journey!” shrieked one 18-year-old girl, dressed as Sid Vicious.

“Rush Limbaugh is Cool!” bragged a chap who badly needed a bath.

“These Colors Don’t Run!” screamed the sweatshirt of another lad with Dolce & Gabbana sunglasses and arms no thicker than twigs.

“No!!!” came the thunderous reply.

Smia Oots is a free-floating wild card racked up on painkillers and an automated sequence of commands who came to Tokyo to pursue her interest in social drinking. Always in search of new moments that can only live on in recollection, Oots asks we put the Enlightenment behind us, stat.
View all posts by Smia Oots →
This entry was posted in Disco Island and tagged dick cheney, henry kissinger, irony apparel, michael jackson, neck and penis, ray goolens, rush limbaugh, sid vicious, smia oots, the brutal times, thom yorke, williamsburg. Bookmark the permalink.

One Response to Irony Apparel a Smash Hit in Williamsburg