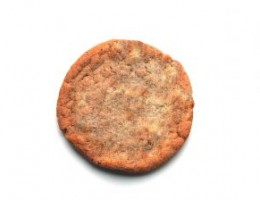 By Grande Chef Otto, LOS ANGELES – A lot of people I know are suffering from allergies these days – hay fever, peanut butter, claustrophobia and arachnophobia being at the top of the list.

But a nifty new diet developed by charismatic California convict Charles Manson is headed straight to your cuisine rescue, courtesy of Japanese impresario Matsumoto Boy and his casually-dressed office tower full of plebes and flunkies.

As you know, even in these dire economic times when the weaker ones are losing their jobs California’s liberal lawmakers are giving away millions in bonuses to cons serving time inside.

Since they can’t technically hand out bonuses to crooks in cold hard cash, they dole it out like in good old days – in the form of cookie dough.

Manson used his share of the scrumtpous light sweet dough to lovingly craft an allergy-free peanut butter cookie which everyone says is really delicious with little or no aftertaste.

“I can’t eat most cookies,” says jailer Roy S Greene, who at six foot seven makes it known with his body language he is capable of imposing lightening quick justice on any inmate who steps out of line. “But Charlie’s cookie didn’t cause me to break out in a rash and I was able to eat it just fine,” he went on.

Yes, prison is good for some people. A lot of Europe’s finest chefs spent time locked up, in straight-jackets, or worse. And the dishes they came up with dazzled the eyes and zoomed their complex aromas right up the schnozzes of the hotshot noble class.

Getting into Charlie’s cell was difficult at first because I didn’t have a key. Luckily, he usually keeps it unlocked so when he got back from the pantry I was waiting for him with my pad and pencil.

“Charlie, your cookies are causing quite a storm. How’dja hook up with bigwig Matusmoto Boy and his crowd? I hear his English ain’t so good. How’d you communicate? Boy you look creepy,” I ventured.

“The…the cookies…came from…the thing about this is you’re talking about what people feel, man,” Charlie replied.

Then Roy S Greene administered mucho justice to us and it took me a week to be able to even get up go out and buy my tv guide.

How could that happen? I thought prisons were supposed to be safe. But then I never expected Charlie would be baking such delicious cookies either. What if everything I knew was wrong?