Friday the 13th: the Book Was Better 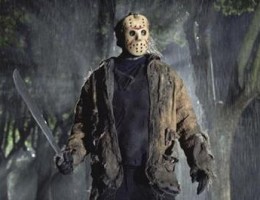 By Shane Butter, TOKYO – Oh god, how I was so looking forward to the new Friday the 13th movie. I read the book last summer during reading week as a break from grading my philosophy grad student papers, and when I heard they were gonna make a movie outta the thing I pooped my pants!

The book, Friday the 13th, by Pulitzer prize-winning authoress Mila Clam of Maldives (she was born in America but lives in Maldives because it’s sunny there), is a red-hot roller coaster ride and it blew my jets completely.

The movie, produced by Michael Bay and made in English left me bloated and angry.

My doctor told me if I get bloated too many times I could die.

The book weighs forty-four pounds and cost me two hundred Euros ($500 US dollars). I bought it online in a Yahoo auction. The last guy who was bidding against me got so pissed that I won won won that he hired a private investigator (L Jon Percivel) to track me like a wild dog for weeks. Once the two of them egged my cottage.

Anyway, I got the book by the lovely and aromatic Maldivian and I read it over and over until I couldn’t think. When my son Jasper, who is gifted and often grades the bulk of my papers at the college, told me that I was starting to speak like the book’s main character Jason Voorhees, I believed him instantly.

Yeah, Jasper was right about that, and how later the book would lead me to don the goalie mask during my sleep time – I swear it helped smooth out my laugh lines and crow’s feet.

Anyway, so when the movie Friday the 13th came out here in Tokyo where I came to see sushi and sake firsthand before I die and it’s too late I dragged my family to see it in the cramped basement of a department store.

“Yes, Jasper. That’s because the film on the screen needs concentrated light from the projector machine to breathe so we can see it and for that to happen the other lights have to be dimmed,” I instructed.

Other family members were forced to stand at the rear of the theater, as is the custom in Japan, so I couldn’t hear what they said. Maybe they didn’t even talk – who knows?

Friday the 13th opens with Canada’s Barack Obama, their prime minster, Cock Blocker, stepping out in a cameo as a padre giving a speech about how if kids are bad on Friday the 13th they get axes in their heads.

Then, just as he says “head”, he gets an axe in his head, only it’s a fake axe, thrown by his long lost brother who it turns out has just been rescued from a magic trick gone wrong, the details of which are too dumb and confusing to explain.

The worst part about movie version of Friday the 13th is that they add so many characters that you can’t even tell who is who or what’s going on.

In the book, there’s only two characters – Jason Voorhees, and his Swiss nutritionist, Ms Hortense Climaxe. And Jason has horrible allergies, and so he has to wear the hockey mask etc etc.

But the movie. Ee gads! I counted 6758 characters in the first hour.

The movie is 11 hours long.

We left after Jason (played by Jack Black, of course) kills his next door neighbor with a machete.

I was shocked and I think Jasper felt the same way.

On the way out of the Seibu Grande International Cinema I found a stray puppy eating garbage.

I took him back to America and I named him Jason.