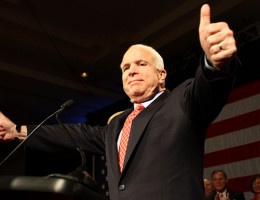 By Barry Hussein, UTAH – That guy who lost the presidential election last year, John McCain, will meet with a nice Iraqi envoy at Denny’s this week, according to InfoSandwich News Service reports.

“Yeah, I’m gonna meet – what’s his name?  George Thompson, an Iraqi envoy this week and get the lowdown on what the situation on the ground is over there,” McCain said, grinning like it meant something.

“Oh I get it, but what does your grin mean?” I asked the big loser.

“It means I’m happy, Barry. What do you think it means?” he replied to me.

“I thought maybe it means you want to eat me,” I responded in response.

“No, I ate earlier,” McCain said back to me, again with that grinning thing he’s always got going on.

Is it just me or are his eyes getting even beadier?

Anyway, I had booked a four minute interview with the Mcster so I plowed on.

“This, George Thompson, how come he’s gonna meet with you?”

“That’s what – envoys – do, Barry. I thought you might have looked that up at least on your Wikipedia.”

“Oh, do you use Wikipedia non-president McCain?”

“I’m learning how to use it to kill my enemies and those who speak against the country – idiot,” he shot back.

“Oh, you didn’t know? You could be easily mistaken for its’ president.”

“Well, at least you won’t have that problem, ha-ha,” I said in attempt to lighten the sudden dark cloud that seemed to have come over our springtime teat a teat.

Anyway, I hope McCain’s not gonna put the nice Iraqi envoy George Thompson in an headlock because they or it (the lock) is sure hard to break and I thought anyone could get out of an headlock put on by a 72-year-old.

It was a teachable moment.

A ferocious intellect, Barry Hussein is not for everybody. Twisting and frugging the nite away, Hussein entices us to sniff his mink sweatpants. Covered in cake, he muses, "Sometimes the hardest sweatpants to fill...are your own."
View all posts by Barry Husein →
This entry was posted in Presidential Daily Brief and tagged barry hussein, beady eyes, dennys, envoy, headlocks, infosandwich, Iraq, iraqi envoy, john mccain, john mccain updates, Presidential Daily Brief, senator mccain, teachable moments. Bookmark the permalink.