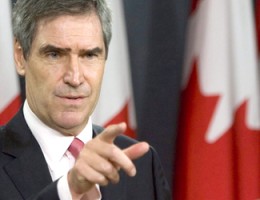 By Styles Cradgerock, GUAM – Overshadowing Japan’s recent magnitude 9.0 earthquake and the U.S. Libyan humanitarian intervention, Canaduh’s 2011 federal election racheted up this morning when Billy, my neighbor and confidante, passed on something he had heard from someone someplace.

Michael Ignatieff was born in Guam.

“Michael Ignatieff, 80, head honcho of the Cerebrals Party of Canaduh, was born in Guam, and as such, therefore, and so on, is not eligible, I think, to run for Prime Minister of Canaduh in this exciting federal election,” Billy told me, warming to his theme.

“Guam is a part of America U.S.A., and as such, is a popular vacation spot for persons too cheap to go to Hawaii. It’s next door to Hawaii.”

Will Mr. Ignatieff go back there now that he can’t be Canadian P.M.?

“Probably. The food is better than Canaduh, and, let’s face it, folks are more good-looking.”

Folks are more good-looking in Guam?

Are the Cerebrals gonna run someone else now ’cause of this scandal?

Even more damning, a person at a hospital in Guam attests that Ignatieff’s certificate of live birth is written in invisible ink.

“He may be a lot older than 80,” she said, on the condition that she not be named in this article as she may not not exist. “He could be like…145.”

Closely following the rules of Pythagorus - to abstain from beans, not to pick up what was fallen, not to eat the heart, and refusing to look in a mirror after midnite, Cradgerock gets all up in the grills of all the world's leaders and their pets like you knew he would.
View all posts by Styles Cradgerock →
This entry was posted in Canaduh and tagged billy, canadian federal election 2011, Canaduh, cerebral party of canaduh, michael ignatieff was born in guam, styles cradgerock, the brutal times, the cerebrals. Bookmark the permalink.

One Response to Exclusive: Michael Ignatieff Was Born in Guam