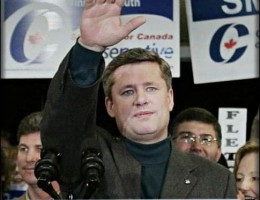 By Marshall Stack, TORONTO – As winter whips its icy way through this Eastern Canadian business capital the only thing that can match the plummeting market descent are the near -100 degree C plummeting temps. And the only place to warm your balls may be the nearest local pub.
But wait. Someone is knocking at the door. Could it be – anarchy?

From my lofty barstool here at my favorite Bay Street watering hole, the Duck n’ Asthma, I can clearly see a group of energetic young punters surrounding the six foot screen in preparation for another hockey match. But the stakes for Canada this season are incredibly high. These days find Canada open for anarchy what with Canadian captain Cock Blocker dissolving the House of Commons before a potentially John McCain-like thrashing by the sticks of  Canada’s Liberals led at the time by milquetoast left winger Stefan Dion (“Celine” to back-room wags).

The spirit among the faithful is apprehensive as I wade among these power brokers of the future to get their perspective on the whole messy mess, and the air is filled with the soggy aroma of poopenshantz and soggy jock straps.

“Blocker?! Guy’s got no wrist-shot eh?” offers Larry Grabowski, 38, of Toronto, who says he has voted Liberal mostly in the past but elected to elect the Conservative Blocker because he says “at the time I kinda got sucked in by his name I guess – it just…conjured up defense I guess.”

“He’s supposed to block,” whinged Carla Kitz, 41, a manager at Grand & Toy. “Y’know, block Canadians from the US and their free trade and all that,” she went on. “But he’s leaving us wide open,” she went on.

Some laid it on the line for the helmeted prime minister, who about a month ago shut down Canada’s government to allow himself time to formulate a winning game plan to confront the global economic crisis – or GECK, as it is affectionately known by fans.

“He’s got to get good or get lost, plain and clear, I think,” sayethed  Dick Clausi,25, a retiree of Crutton Ontario. “I mean, these guys get pretty high salaries, right? So they oughtta be, like, good at least. Am I right?”

“I’ll tell ya what the f—in’ problem is,” overtures Jeff Dunning, 54 of Don Mills,  who stains decks for a living, “they gotta put a leash on their enforcers, man! It’s always the same sh-t! Tucker* and f—in’ Domi* gettin’ penalty minutes late in the third and they get scored on. Every f—in’ year, man. It’s hard to stay a fan sometimes. No wonder Sundin* went over to the NDP.”

(* Canadian members of parliament for the ridings of Rickeyboat, British Columbia, Bustle, Saskatchewan, and Larage, Quebec. NDP refers to another political party in Canada. It stands for “Non-productive Disco Peanuts”).

And what of the new US president? Obama is known to have dug anarchy in his younger days and still listens to shock rockers Avril Lavigne and  Sum 41 on his iPod touch. How might he feel about Canada’s current lack of direction? Its staggering slide toward anarchy and looting?

I asked a black man.

I forget his name because honestly I felt a little nervous talking with him and I just forget to ask. But here are his exact words:
“ Obama? Well, that’s a different league but f— yeah the Raptors* could use him, eh?” (* a Toronto-based bocce ball squad six thousand strong).

With opinions flying hither and yeller I retreated back to my post at the bar to find my pint being finished by a scruffy motorcycle enthusiast.
>Nonchalantly walking past him to the door I was called to reflect upon the Canadian objective self awareness and how it will guide us, like it always has, through this brief period of confusion and late penalty minutes.

Failing to heed his own warnings, specialist in moral turpitude Marshall Stack has hit a roadblock. Yes, gang, just like you and me, he's the opposite of delicious. According to passersby, Stack possesses that rare commodity of being able not only to control his own weight, but also that of others. We're so proud of him for not breaking anything.
View all posts by Marshall Stack →
This entry was posted in Presidential Daily Brief and tagged anarchy, avril lavigne, canada, canadian hockey, Canaduh, cockblocker, financial crisis, global economic crisis, hockey, ipod touch, marshall stack, motorcycle enthusiast, sum 41, the brutal times, toronto. Bookmark the permalink.