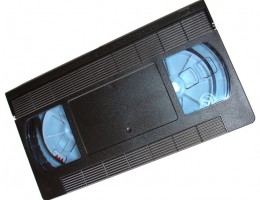 By Styles Cradgerock, 177 Dusty Meadow Road, PAKISTAN – Classic War on Terror action figure and actual mass murderer Osama bin Laden is alienating younger followers this morning in his hideout with news that “all 2009 al Qaeda videos will be issued on VHS only”.

VHS is a popular video format in jihad circles, and has been the trusty format of choice for al Qaeda productions with the exception of  1982’s “Death to America the Musical Part 3” which was shot on Beta.

But younger demand for bin Laden blu-rays has been high ever since Qaeda lieutenant Jar Jar Binks debuted his performance in “Jar Jar Steps Out”.

“So – clear, his face was,” glommed fellow Qaedite newbie Larry Neville, 37, of 177 Dusty Meadow Road (Apt. #2), praising Binks’ blu-ray performance, in which he plays travelling salesman Hortense Talbot, who has come to Pakistan to sell shoes, but in the course of the 5 minute student film finds himself wrapped up in the bed of sultry al Qaeda princess Sutana Cripp.

“Usually I’m so busy in the pantry making submarine sandwiches and whatnot for the guys, as they’re too busy plotting mass murder and generally ranting to do so,” Mr Robertson, who lives in Apt #4 at 177 Dusty Meadow Road claimed. “But that night they let me see that movie. Boy was I filled with glee,” he went on.

Bin however, was less than plussed with Binks’ romp in the sheets with the pert young Cripp, who due to her sex appeal has international diplomatic immunity etc.

“I could see every pore on his reptilian face,” Bin complained of Binks, according to members of Google and Yahoo news who attended the campfire cookout after the Binks film ended. “And I can’t stand his beady eyes,” he whinged.

“Yeah, and so, ’cause he doesn’t like it, no blu-ray for us,” confirmed Christine  Brown, 50 (Apt#11). “Even Pakistan will start broadcasting in blu-ray starting in May, so I don’t really see how he’s gonna get his message out with that kind of attitude,” she added.

Blu-ray has crispy lines and peoples’ pores can be seen right into. Most people love it.

But like, would people respond better, or worse to Bin’s vids if they were on a better format or not?

Dr Ray Goolens, who has a tv and used to have a whole lot of VHS video tapes says that sooner or later even Al Qaeda’s gonna embrace the new pricey medium of blu-ray.

“Oh, it’s a no-brainer that they will,” said Goolens.

Closely following the rules of Pythagorus - to abstain from beans, not to pick up what was fallen, not to eat the heart, and refusing to look in a mirror after midnite, Cradgerock gets all up in the grills of all the world's leaders and their pets like you knew he would.
View all posts by Styles Cradgerock →
This entry was posted in Presidential Daily Brief and tagged beta, blu-ray, jar jar binks, osama bin laden, pakistan, Presidential Daily Brief, student films, styles cradgerock, the brutal times, vhs, war on terror classic. Bookmark the permalink.