A Brutal Guide to Shimokitazawa 2: Lunching 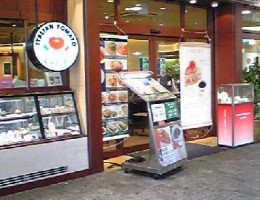 By Grande Chef Otto, Tokyo, SHIMOKITAZAWA – I know I know, you’re all shaking your collective headbanging heads wondering why I’d go and do such a crazy thing.

Eat out in Shimokitazawa.

Well I was hungry.

And I think my apartment may be haunted, but that’s another story.

Anyways I was dyin’ to get out and I thought hey how about a nice light snacky wacky – it’s about brunch time and I love a nice little brunch.

The first place I spied was the juicy outdoor Italian Tomato on the south side of the train station.

I dutifully ordered my plate o pasta and frothy coffee beverage and consumed it at 50km/hr according to international law.

Then tragedy stuck my bottom.

One hour and four minutes after consumption my colon spewed light sweet crude ten thousand fathoms into the spring air.

This was not part of my plan.

Following forty-four hours locked to the top of my Toto toilet seat I was in an mood for revenge.

Italian Tomato had taken my time. How dare it/they.

“Hey – your eggplant bacon pasta made me poop my pants for like forty-four hours bro,” I said in honorific Japanese to the head chef Mr Ken Takamatsu.

“We know you – we know you wrote such a horrible review of Tapas Tapas Italian Restaurant,” he bluffed. “We know we cannot believe anything you say,” he went on.

“Come come, Mr Takamatsu,” I replied, as patient as the Buddha for my sweet revenge.  ” If what you say is true and I am indeed a liar, let us observe over tea the behavior of the rest of your patrons after they have consumed their scrumptous meals.”

“But that would be impossible,” Takamatsu said. “We…we would have to…to follow them home or wherever they go to following their digestion of their lunches.”

“I am not…chicken,” he glared back at me.

The first customer we followed was Ms Hiroko Watanabe, a 24-year-old office lady. She consumed a tiny biscuit and a cup of tea. After leaving Italian Tomato she took a choo choo train to Hakone, a lush hot spring resort. In hot pursuit Takamatsu and I shelled out over 15,000 yen a piece in train fares and for hot drinks to keep us warm on the overly-air-conditioned journey.

After photographing the lithe Ms Watanabe using a telephoto Canon Pornographer’s lense and posting the best of our results at rightwingthinktank.com, we returned to Shimokitazawa’s Italian Tomato.

“Dude – we are not finished yet,” I deflected deflectingly.

Next we followed Mr Salvatore Baine, an American investment banker at Goldman Sachs.

But later after following thirty-five patrons I was proved right because they all were totally ill.

Why had no one but me, Brutal Times G-man, complained?

“You have a foul disposition and frankly speaking, your aura is wonky,” explained Mr Takamatsu, who also thinks he knows stuff about stuff other than Italian Tomato.

But…but really? I mean, one of the reasons I came to Japon was to rid myself of any bad vibes, like in Karate Kid.

“Perhaps then if that is what you truly wish, you will allow me to give you an enema after I get off work,” replied Takamatsu.

4 Responses to A Brutal Guide to Shimokitazawa 2: Lunching