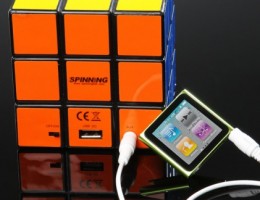 By Smia Oots, BRISBANE – Choosing balmy Brisbane as the setting to showcase their first joint venture, former arch rivals Apple Computer and Rubix blew everyone’s jets when they unveiled what industry insiders are saying is revving up to be the hit of the summer.

“iPube has all the features you’ll find in your top of the line iPod,” says Apple founder Billiard Gates, “but then we smashed it into a Rubix cube.”

Rubix cubes from inside the pyramids have amused folks for years, killing awkward moments between coworkers and even reducing sexual tension on the bus.

Jimmy Jam-san, local dj says he wants to “buy 20 of the things.”

Rubix and Apple had been meeting secretly in donut shoppes and at Denny’s for days, getting hammered and hammering out their deal on who’d get what out of the two hundred million billion zillion dollar deal to blend the Internet and a cube.

“We’re happy with what we came away with (from Denny’s)” says Rubix CEO Ventura Go. “Money is so great – it really doesn’t matter how much you get, just as long as it’s a lot.”

Really? How so Joe?

“Well, it’s like if you live in Canada for a while, and you’re every day complaining about how your balls are froze, and then you move to Tokyo and it ain’t that cold to freeze your balls, but damn if you don’t after a few days of eating sushi start bitching and whining about how damn cold it is.”

So this ‘pube is gonna solve the global credit crisis and revive Lehman Brothers. What kinda features it got?

“We’ve designed it so that it retains most of the features our customers loved about the Rubix cube – the clashing color scheme, and the fact that it’s this endless frustrating puzzle that can only be solved by sheer accident or by some gifted dude,” croaked Rubix chief designer Witherspoon.

And then it’s got all the features we love about the iPod?

“Yeah, we already told you that.”

How come you only got one name?

“Because there’s only one…of me”.

Right. But seeing as you sort of just smushed the iPod and the Rubix cube together aren’t they like, broken?

“You’ll have to try solving the puzzle to figure that out.”

Smia Oots is a free-floating wild card racked up on painkillers and an automated sequence of commands who came to Tokyo to pursue her interest in social drinking. Always in search of new moments that can only live on in recollection, Oots asks we put the Enlightenment behind us, stat.
View all posts by Smia Oots →
This entry was posted in Special Report and tagged apple, brisbane, gadgets, gizmos, ipod, iPube, pubes, rubix cube, smia oots, the brutal times. Bookmark the permalink.