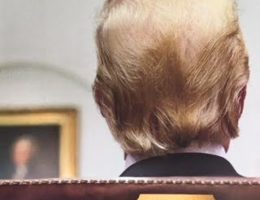 By The Brutal Times Editorial Board, NEW YORK – As White House officials including Vice President Mike Pence raced to deny they authored an anonymous  op-ed published Wednesday in The New York Times, whose writer claims to be part of a “resistance” inside U.S. President Donald Trump’s  inner circle in the administration, The Brutal Times has learned the true identity of the official behind the piece.

“It took me about five minutes to guess who it was,” said Styles Cradgerock, senior political columnist at The Brutal Times. “All the usual suspects are going round asking, ‘Is it Pence? Is it Pompeo? Is it Mnuchin?’ None of these guys can even string a sentence together. And of course, they’ve all denied it, in words that have absolutely no resemblance to the type of lingo the writer of the op-ed uses. I figured it had to be Rand Paul.”

Sen. Rand Paul of Kentucky had been an eloquently outspoken critic of the president, before suddenly earlier this year turning over a new leaf and, according to various media becoming one of Mr. Trump’s most-often sought-out ears to lean on.

“But then I thought, it’s too predictable. Before Trump it would be natural for someone like Paul to work his way into the president’s inner circle, gain his confidence and still keep working away at advancing his own agenda – typical of any administration. But this administration is anything but typical. It ain’t Paul. As much as I like how that plays. It has to be more unpredictable, less likely, bizarre.”

Cradgerock says he then stepped outside his RV and wandered out into the yard to stroke his pet goat, Baba. Within 30 seconds the answer appeared.

“So then I thought … it must be Trump. I mean, what hasn’t he done yet, but secretly undermine himself? He’s undermined himself by accident. He’s done it in public. But not … going behind his own back … to do so himself. Genius. And taking the story to his arch-enemy the Times is pure Trumpian ‘always take the most unexpected route’ thinking. He’s not going to allow there to be any ‘resistance,’ because he is the ‘resistance.’ And the Times, has to print the story because it’s too damn good. There’s never been anything like this (until tomorrow) but so they have no way around not printing it and he’s got them because he’s insisted they print it anonymously. That’s the condition.”

Closely following the rules of Pythagorus - to abstain from beans, not to pick up what was fallen, not to eat the heart, and refusing to look in a mirror after midnite, Cradgerock gets all up in the grills of all the world's leaders and their pets like you knew he would.
View all posts by Styles Cradgerock →
This entry was posted in Latest Brutality, Presidential Daily Brief and tagged new york times trump resistance author identified, Presidential Daily Brief, styles cradgerock, the brutal times. Bookmark the permalink.