Is Mike Pompeo Starting to Look Like Kim Jong Un? 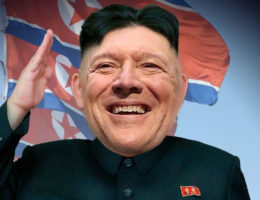 By Billy, Belmopan, BELIZE – Hey, is it just me or is Mike Pompeo starting to look a lot like Kim Jong Un?

So, does he look like North Korean dictator Kim Jong Un now, or what?

“Well, I think that’s probably making quite a stretch.”

But he looks different from like a few weeks ago before he went over for that secret Easter summit in the Pyongyang.

Before he flew over there to talk to Kay Jay about that summit thing, with the Trumpster, later on.

“I wouldn’t know about that.”

“Well look, a lot of people’s faces change when they fly.”

No, but this was after he flew. He’s off the plane now – the flight’s finished.

“Are you trying to be smart?”

No, look, but don’t you see the resemblance between the-

“You get paid for thinking up crap like this?”

Yeah, but the writers-

Yeah, but the writers, they-

“I suppose you think it’s supposed to be news?”

Well, I thought it was interesting …