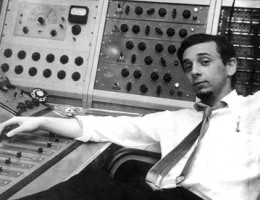 Tuesday, a local L.A. lad appeared to have discovered a bottomless tomb under Spector’s mammoth residence/studio.

“I crawled under there looking for my baseball and I think I found a tomb full of unknown session musicians,” the boy, Darryl RJ Dennison, 37, said.

Detectives were left scratching their heads at how a thing like this could possibly be true.

“We’ve heard all sorts of reports,” said Staff Sgt Gale Weale, speaking on condition she not be named in this article. “The guy from Toto is in there,” she added. “There are bunches of back up singers from Springsteen’s band. Multiple line-ups of Genesis are down there,” she confided.

Although police had yet to investigate the scene, local resident Ray Goolens, who is thinking of taking an online course in music criminology, claimed to have retrieved a crucial piece of evidence from the scene which he hopes to “sell to the highest bidder”.

Portions of audio tapes Goolens claims were made inside Phil Spector’s studio appear to show bone-chilling conflabs between such high-falutin celebs as Ramones’ bassist Dee Dee Ramone and the imprisoned music maverick.

SPECTOR: Oh, do you know? Spin the gun.

(The sound of a gun barrel spinning is heard along with sharp intakes of breath, presumably from the other band members of The Ramones)

Baz Ramone was replacing downsized drummer Tommy Ramone during the session. A veteran session musician from Sweden, Baz Scheldmann III had palyed with Toto, Alanis Morrisette, and The Beatles. His friend, Tammy, 52, had starred in the musical Cats. He was last seen recording with Phil Spector and The Ramones in the summer of 1979.

Just before the tape provided to the media by Goolens runs out, a voice, presumably Spector’s, but which sounds nothing at all like him, says “They would have wanted it that way, if they’d had wills of their own.”

The same person (presumably) is then heard digging a mass grave with the help of unpaid interns in their ’20’s.

Better than nothing, DJ Salinger shakes it where the sun don't shine. BT' s resident recluse on the loose, Salinger is the trouble with this generation, begging the question, What is the sound of one fist bumping?
View all posts by DJ Salinger →
This entry was posted in Thinking Man's Rock and tagged dee dee ramone, dj salinger, genesis, los angeles, phil spector, ray goolens, the beatles, the brutal times, the ramones, tomb of the unknown session musician, toto. Bookmark the permalink.