Reality is Worse than TV 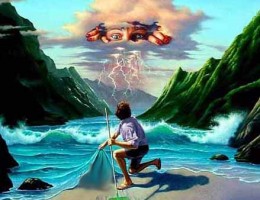 By Daemon Mailer, NEW YORK CITY – Millions of Americans are apologizing this morning to their long-suffering tv sets as a landmark report issued in the wee hours is confirming what everybody already knew:

Reality is worse than tv.

“Reality is worse than tv,” Sarah Jittra, 22, an unpaid intern with prestigious Caribbean think tank MyGoodies pointed out as she whispered parts of the gripping report, “How About TV?” in my ear.

“It definitely…flies in the face of what parents, especially my mum and dad, told me,” said Billy,11.

“Oh, stuff like ‘If you watch tv you’ll grow balls on your hands,’ and other urban myths.”

“Tv contains 5,9898765689 gunshots, mostly to the head and carotid area a second,” explained tv-watcher Guy DeWitt, 78. “When I went on vacation to Toronto, I can tell you I saw three, four times that number this close to my face,” he went on.

Any other probs with real life?

“Oh, sure, I mean you get ripped-off right up the wazoo,” says Mirabelle Kurtz, 15, a hedge fund manager at Goldman Sachs. “When I get home from my cube all I wanna do is get high and watch the tube,” she went on.

Just how common is this attitude and the ramifications etc?

“It’s pandemic to the way we live now, which is moment to moment, hand-to-mouth, cheek to cheek,” claimed Ray Goolens who was having a snack nearby.

Are we neck and neck with someone or something as well?

“Why don’t you ask yourself ?” Mr Goolens asked himself.

Lastly, was this case always the case?

“We don’t have reliable data to indicate otherwise,” clarified Sarah Jittra who I told you before works at MyGoodies. “So it probably was like, the case all along,” she went on.

Should I upgrade my set?

“You should definitely upgrade,” Ms Jittra agreed. “Now that you know what you know it’s hard to ‘turn back the clock’ as they say and become stupid again,” she added.

Sweet little Daemon Mailer invented the internet in his garage while he was trying unsuccessfully to invent the first rental video store. Like the rest, Daeme is also making moves to cash in on BT's success and avoid eating peanut butter out of a jar livin' in his car the rest of his life. All during the night as he wiggles to an 'fro, some kinda machine records his thoughts, churning out a pile o crud to be compiled in the forthcoming tome, “I am Spam.”
View all posts by Daemon Mailer →
This entry was posted in Ask Daemon Mailer and tagged all the facts you need, confusion, daemon mailer, get ghigh and watch the tube, goldman sachs, help me for gods sake, new york city, ray goolens, reality, reality is worse than tv, the brutal times, unpaid internships. Bookmark the permalink.