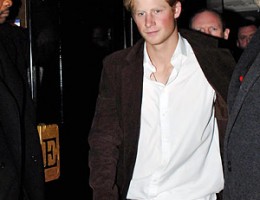 (By Styles Cradgerock) LONDON, England- The twisted tangled trail leading to the unmasking of the true identity of one of England`s most notorious murderers has taken yet another twisted tangled turn . In what has been the first concrete step taken towards solving some of the most horrifying crimes in Britain committed during heady nineteenth century London – the Jack The Ripper murders – Prince Harry confessed.

“Fergie suspected something was up with Harry from the moment she met him, shortly after she entered the royal family a few years back,” Detective Sparrel announced Tuesday morning.

“Fergie’s solved crimes for us in the past – unofficially of course, and usually on a much smaller scale – finding lost bicycles, pets – that sort of thing,” Sparrel confided, over a steaming mug of what Yard detectives fondly call `bobby’s breakfast’ (a noxious mixture of gin, raw eggs, bacon bits and process cheese) “but we knew from experience that her information was reliable. So when she came to us with the Ripper story there was no question – we knew we had our man.”

The grisly multiple murders which terrorized London and nearby swanky uburb White Chapel have remained unsolved for over 100 years. Police cite downtime incurred to the force over long holiday weekends, and the laziness of one Yard secretary, Betty Riley, who died at age 118. Ms Riley, who handled much of the Ripper filing system was somehow granted the position without undergoing a thorough background check. It was only after her death that it was discovered she lacked an MBA degree.

The enigmatic killer known as Jack The Ripper infamously sent notes to police taunting them over their bungling of the investigation. The notes were signed “Yours Truly, Jack The Ripper.”

“I respect Prince Harry’s decision to face the music in this, what has become a most important issue for almost all British people,” said British Prime Minister Gordon Brown in a statement issued minutes after the prince was seen being whisked towards a central London holding facility designed to house criminals who live centrally. “Though I’m not a doctor, I would guess he probably has a split personality, and may not even have been aware he committed the murders,” Brown suggested.

Murder is a crime in England punishable by death.

Prince William wrote on his blog www.billysmadhouse.com “…the recent events surrounding my half-brother Harry….lead me to believe there may be a conspiracy involved, mainly involving Harry, Miss JK Rowling, and her lover, JRR Tolkien Jr.”

JK Rowling, famed British authoress of the Harry Potter series has been dating JRR Tolkien Jr, the reclusive grandson of Lord of the Rings trilogy author JRR Tolkien. JRR Tolkien Jr is well-known for his fiery temper and interest in the occult. On Monday, as word of Prince Harry’s confession spread through London, pubs were alive with gossip regarding young Tolkien and Miss Rowling.

“Harry’s innocent,” declared Edith Dawg, 86, of Kent, who was drowning her sorrows at The Duck n’ Fox tavern near Piccadilly. “It was that Tolkien, I’d say. Him and that JK. Casting spells, you know.”

England’s punishment for casting spells was reduced from the death penalty in 1986 to community service, yet most Britons are still decidedly anti-spellcasting.

Acknowledging the public’s distrust of the official police detailing of the Prince’s confession, Detective Sparrel said “It’s to be expected – the public lets out a collective sigh of relief at ten o’clock when they find out Britain’s most horrible monster is finally off our streets; then by eleven, they’re already nostalgic for the days when they had some thing to moan, groan and fantasize about. That’s Britain for you.”

Closely following the rules of Pythagorus - to abstain from beans, not to pick up what was fallen, not to eat the heart, and refusing to look in a mirror after midnite, Cradgerock gets all up in the grills of all the world's leaders and their pets like you knew he would.
View all posts by Styles Cradgerock →
This entry was posted in Exclusive!, Hollywood Pap and tagged hollywood pap, j.k. rowling, j.r.r. tolkien, jack the ripper, prince harry, prince harry confesses to ripper killings, scotland yard, styles cradgerock, the brutal times, the lord of the rings, unsolved mysteries. Bookmark the permalink.