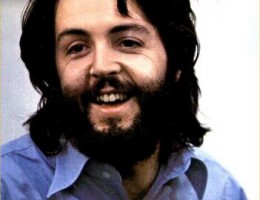 By D.J. Salinger, BALTIMORE – Wiping his hands on the brim of his skintight jeans, Beatles’ front man Paul McCartney shocked a bunch of loitering black bloc anarchists patiently waiting for a bus, when he whispered at them, “I’ve got something that’ll really flip your lids, lads – The Beatles were an hoax.”

Greg Davidson, 23, a bulky black bloc anarchist lad who spray painted a large colorful abstract penis on a Starbucks in Toronto during the G-2o summit earlier this year said he was badly “shock-rocked” by McCartney’s sudden whispered announcement.

“I was shock-rocked,” he said, “and I’ve gone deaf in the ear he whispered into,” he went on.

“Greg was shock-rocked; he’s gone deaf in that one ear,” she whispered.

Why are you whispering?

“It’s the thing now – with us young people.”

Anyway, Paul says the Beatles were a hoax and that:

“We never played our instruments – they were played by robots – Kraftwerk.”

“And I never knew the other Beatles.”

“Don’t even know their names.”

Really. So, if I said The Beatles were Alberto Applegate, Jimmy Jeans, Heygood Hardy and Saddam Hussein you’d be fine with that.

I thought you just said the whole thing was a hoax.

“It was mate! It was! But somebody had to be the ringleader.”

Huh. Well, what else – we’ve still got some words left.

“Ok, I’m only going to go through this once, but – it wasn’t us on the albums, the albums don’t exist, I don’t exist, George Martin doesn’t exist, the sounds on the nonexistent songs are fake, I’m lying to you now and all this was made up a long long time ago before you, I, or this so-called world was ever quote end quote created, mate.”

I see, but…krikey, why burst everybody’s balloon? And so close to Halloween, too? What’s the motivation, mon?

“I think it’s important to set boundaries and to carve up what’s remaining of the shared global unconsciousness and fill it with a creamy reality filling.”

“All right, well how about that…I’ve sort of run out of ideas and…that’s kind of where, like, this focusing on reality and things kind of seems to come in handy.”

More convincing. Do you ever see Ringo?

“Sure. But not as often as I see Saddam…and Alberto Applegate.”

Better than nothing, DJ Salinger shakes it where the sun don't shine. BT' s resident recluse on the loose, Salinger is the trouble with this generation, begging the question, What is the sound of one fist bumping?
View all posts by DJ Salinger →
This entry was posted in Thinking Man's Rock and tagged baltimore, black bloc anarchists, d.j. salinger, G-20, green day, linkin park, paul mccartney, poular hoaxes, ringo, saddam hussein, skintight jeans, starbucks, the beatles, The Beatles were a hoax, the brutal times. Bookmark the permalink.

One Response to Paul: “Beatles Were an Hoax”