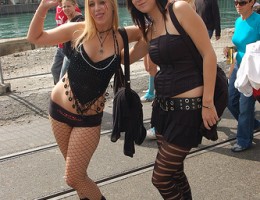 By DJ Salinger, BAFFIN ISLAND – With wind chill temperatures here at already -89C and folks on this sparsely-decorated backward island nation clutching their nether regions with a rabid ferocity just to keep alive, the basic human desire for good news is at an all-time high.

They’re gonna have to wait.

News erupted via town crier that the number of female death metal fans worldwide has dropped.

For a country (Baffin Island, mentioned at least once previously) that depends heavily on death metal as its lifeblood, the blow may be the final deathblow to an economy already reeling from the the impact of the global financial crisis (or GECK, as it is known by fans).

And girls are the problem?

“Well, yeah. Last season Wikipedia showed 15 girls – women, who liked death metal; 13 in Baffin island, one in Jamaica, and the other, ah, in…sorry – 12 girls,” explained Mr Gale, crouching in front of me.

“Well, there are some in the diaspora- of death metal – who think she might be “being ironic” with the whole thing, and not even really like, like it.”

Death metal, ironically, began as a joke in/on Baffin Island in 1865, when Oar Bit, 7, a longshoreman, came home from high school band practice where he had been playing the tuba.

“Fuck this,” he said, “from now on I’m playing the electric guitar, and I’m gonna play…death metal.”

Seeing as Baffin Island had no other export potential, Professor Helene duBois III, mandated that all death metal goods produced be shipped to Canada, “and from thence, to the world,” in her 1982 best-selling pop-up book, “Baffin Island Pop-up Book” (1982 Brutal Times Press).

So why don’t the honeys dig the hot tunes?

“Historically women are taught by the tv to check out more top 40 fare, and this has kept them off the streets, thankfully,” asserts Un Faber, 1, a hedge fund manger who has collected death metal manuals since 3 months of age.

“Women are liking death metal more and more and so the numbers themselves tell a different story,” says Un Faber, 1.

Wait- but you just said…

“While it is true, in some sense, that record companies, fitness clubs and so on may wish to see a raise in the figures of females who “like death metal” the numbers themselves don’t actually point to either a raise, or a decline,” he went on.

But what the hell does that mean? I mean a second ago you were saying something, like totally opposite. Plus, like, you’re 1. How come you talk like that?!?

“Admittedly the numbers on the surface at least display a so-called “drop” but the numbers- the numbers don’t actually drop; rather they remain unchanged, which is why we worship them,” he insisted.

Better than nothing, DJ Salinger shakes it where the sun don't shine. BT' s resident recluse on the loose, Salinger is the trouble with this generation, begging the question, What is the sound of one fist bumping?
View all posts by DJ Salinger →
This entry was posted in Thinking Man's Rock and tagged baffin island, death metal, dj salinger, eyes of magog, females, girls who like music, global economic crisis, the brutal times. Bookmark the permalink.