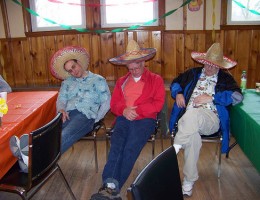 By The Serge, LOS ANGELES – Prestigious Caribbean think tank MyGoodies released what amounts to a 35-year landmark study on parties, “Parties: a  Study”, today at Denny’s.

Most parties are bad.

“We went to over 6787698760 parties over the course of an average month, over the course of those average years in various straight and psychedelically-enhanced states of mind,” insisted Prof. Jack Jacques, who has found himself the subject of wide ridicule ever since he was born. “I only had a good time once,” he went on, “and that was at the first party, 35 years ago.”

Alongside the professor, leggy Fergie from the fabulous Black-Eyed Peas supergroup may have taken part in the study.

“Fergie is a people person and so chances are good she was there at least once,” said someone whom refuses to be named, at someplace sometime.

And, the parties were held in every locale you can imagine – from parents’ basement to inside an aircraft carrier heading for Afghanistan and the fantastic war or terror!

But, “I was excited at first, y’know you think you’re gonna meet some interesting people, exchange email addresses and then go have sex in their car, but it seldom happens,” lamented Lamont Kolb, 50, an unpaid intern at thebrutaltimes.com. “Whatever you do, do not go to a Halloween party,” he cautioned, gripping my leg.

So, are people turning anti-social ’cause of online gaming, hotmail, etc?

“People have always been anti-social,” says Kay Burger, 23, a philosophy graduate student at Tokyo’s Temple University, who is writing a book on parties, “My Party, vs Your Right To Party”, due to be released by MotherEarth Imprint next weekend.

“But the catch is that most people like anti-social people,” she went on.

“The mystery of ‘the Stranger’ – what the French call ‘L’Etranger, and the Germans call ‘poopenshantz’ is central to what it means to be a yuman being,” she kept talking.

Did you just say “yuman”?

“Yes, and I think that if you’re trying to to make fun of me, you’d do best first to look up the origin and usage of the word and then I think you’d find out I’m ‘in the know’ and a member of a secret society.”

Ok, after I finish the article I do it!

Channeling Pascal (The source of all man's misfortune is his inability to stay in his room) the serge confides, "In my day, we didn't call them love hotels - we called them sex hotels." Begging the question, Vuvuzela avec moi, ce soir?, BT readers get so much pleasure out of his columns they...ought to be punished.
View all posts by the serge →
This entry was posted in Disco Island and tagged afghanistan, bad parties, dennys, fergie, get into the groove, hotmail, my goodies, secret societies, temple university, the black eyed peas, the brutal times, the serge, war on terror, yuman. Bookmark the permalink.

One Response to Most Parties Bad, Study Shows